I was fortunate to review Onwards And Downwards a short while back and that album has been consistently in rotation for me. There are so many interesting elements to the album, and I discover new things each listen and I didn’t expect to be able to pick the brain of one of the masterminds behind this art.

I know I say it often but it is truly heartfelt when I say I’m inspired by these outstanding musicians. Hampus Sandell is no exception and offers up some unique and thought-provoking advice and I’ve actually had to stop playing guitar to finish writing this intro out.

The entire album Onwards And Downwards is great from start to finish. It flows perfectly and maintains the theme of madness, both musically and lyrically. When writing music do you create individual songs or think more about the entire album?

For me I guess it’s a little bit of both. The early stage of the writing process is just trying to get a sense of the mood and vibe of the songs. Trying out different orders to see if something needs to be added or altered. I always try to visualize an album as a journey (yeah I know it sounds pretentious), to me it’s important that the album flows smoothly without being static and boring.

What is your writing process like when creating riffs and ideas? Is there a particular key or scale you like working in or do you experiment?

One thing that I’ve noticed about my own writing process is that it never works when I want it to. Whenever I sit down and think to myself ‘alright now I’m gonna write a new song’ I just get blocked and nothing good comes out of it. Most of the riffs and songs I’ve written for Alastor have come to me when I’ve been ‘noodling’ around during practice or when I’ve been outside walking and just thinking up stuff inside my head.

In terms of scales and keys I think I experiment to some extent even though I sometimes feel like I’m doomed to repeat the same pentatonic blues licks over and over again.

Is it even possible to create unique music? No, but in all seriousness I try to not think in those terms. For me it’s not important to write unique music as long as it feels genuine. Repetition in music, as well as any art form, is just a natural part of it and something you can hear almost anywhere you turn. I think it’s something that everyone does either intentionally or subconsciously.

Do you have a song, or even part of a song, you’re particularly proud of writing?

Definitely! I am very pleased with how the last solo of the song Lost And Never Found turned out. Especially together with the organ that Christoffer Karlsson (The Dahmers) plays on the recording. I’m also quite pleased with the title track and how the different guitar parts interact with each other. And I have to mention the feedback around the 4:22 mark in Dead Things In Jars. Sometimes it’s those small details that really gets me.

And if we’re going to mention something not guitar related, I really like the vocals on Death Cult. Since it’s the first song I do the main vocals on I was a bit nervous on how it would turn out, but I think it turned out great.

Your guitar tones are epic! The fuzz on Onwards And Downwards and Lost And Never Found are sonically perfect. What amps are you currently using to achieve your tone, and do they differ from recording in the studio to live?

I’m currently using a vintage Matamp GT120 from the late 70s, maybe 76 or 78. I’ve also used a more modern GT120 but there’s just something about that vintage amp that I really like. Maybe it’s all imagination and that I got it for a really good price – haha.

For fuzz I used a one knob pedal from Toetag Electronics simply called The Fuzz. I think it pairs really well with the Matamp. I’ve used a number of different fuzz pedals in Alastor, both on recordings and on stage. I’m not too concerned about keeping the live sound close to the sound of the recordings as I see them as two completely different things. One thing that works in the studio might not work at all in venue. I’ve actually been to concerts where I’ve been disappointed because the band has sounded exactly the same as on albums

One specific part in a song I love is the transition at the five-minute mark in Dead Things In Jars. The distorted guitar cutting out with an echo is cool and the delayed solo is awesome What pedals are you currently using to get these tones and are any of them custom made for you?

Thank you! For that particular part I used a Boss DD-3 delay and the neck pickup on my guitar to get that warm tone. There might have been a MXR Micro Amp involved as well but I don’t remember. Nothing too fancy or ‘boutique’ but It works good for me. I’m too poor to be able to afford custom made stuff.

I’ve used the same delay pedal on every recording and gig I’ve done with Alastor. I’m actually not sure if I’ve bought the pedal from Johan [Björmander] who plays second guitar or if I’m still just lending it – haha.

My main guitar is a tobacco burst 1989 Burny Les Paul…

I have a handful of guitars and always looking for more [haha], what guitars do you have, and do you have one favorite or an arsenal of guitars to choose from?

Currently I own three guitars, two Les Paul’s and one Stratocaster, all Japan made. My main guitar is a tobacco burst 1989 Burny Les Paul that I got in 2016. I’ve used that one on every recording and gig with Alastor so far. It’s always fun to buy new stuff but unfortunately (or fortunately) I can’t afford to buy new guitars on a regular basis. I’ve always wanted to try an aluminium neck guitar though. Maybe sometime in the future.

I still have the first guitar that I bought with my own money. A white Aria Pro Les Paul from the 80s (or was it the 70s?) that I bought the same day I got my first student loan (priorities!). I rarely play it today and I’ve thought about selling it on more than one occasion but never gone through with it. I guess it’s a neat reminder of where I once started.

Do you have a practice routine or warm-ups you do on a daily basis?

I wish I could say that I do but it comes and goes for me. Sometimes I’m more focused, I play and practice every day and sometimes I don’t play at all.

I get those days a lot as well. It might sound a bit of a cliché, but I think it’s a natural part of being a creative person to just utterly hate everything you do from time to time. At least that’s how it’s been for me my whole life. One thing that I have learned is to recognize a pattern when I struggle with those situations, usually the inspiration comes back after a few days. I think it’s important to remind oneself that it’s okay to feel low about your own creativity and be able to take a break every now and then.

What songs/bands are you currently listening to?

Currently I’ve been listening to a lot of Swedish indie pop like Doktor Kosmos, Bob Hund, Hästpojken etc. I’m a real sucker for songs with catchy melodies. Yes, you can play in a doom band and listen to things other than Sabbath.

Thanks again for taking time out of your busy schedule to answer my questions. I really appreciate it. Is there anything else you would like to add?

Thank you for reaching out and wanting to include me/us in your series! I get moved each time someone takes an interest in what we do in Alastor.

Alastor and their latest album Onwards And Downwards is out now via RidingEasy Records. 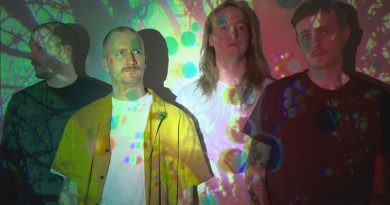 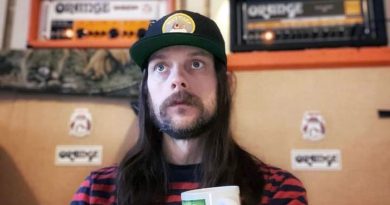 In Search Of Tone: Thomas V. Jäger Of Monolord