Berlin based instrumental 4 piece band neànder have been described as post-doom, post-metal and stoner amongst other things, however the closest description I’ve read was written by a friend of the band ’Sweeping ambient music with the intensity of a Norwegian Black Metal group’ and ‘The missing link between Explosions in the Sky and Bongripper’ is pretty close to the mark, with nods to Russian Circles and Mogwai. That is if you need a spoken or written description. My advice is listen to the music and let it speak for itself.

A highly impressive debut which was self titled and released in 2019. UK’s RnR Magazine featured its Best of 2019 as a ‘Proof that there’s beauty in melancholy is the instrumental soundscape neànder by Germans of the same name’, while Rolling Stone scored 4 out of 5 stars and named the four-pieces’ sound ‘a dead black moonscape’. This they followed by two singles and now their second full album, Eremit out October 9th 2020 by Through Love Records. I contacted guitarist Jan Korbach to ask if he would answer a few questions for me and he kindly agreed to do so. This is what he had to say for himself.

neànder formed in 2017 and features members from And (blackgazers), Patsy O’ Hara (hardcore punk), Earth Ship (sludgers) and Casper (indie rock). First off can you give us the full band members and what instruments they play in the band?

You guys obviously have fairly diverse influences but your hearts sound like they are fully committed to neànder by the intensity in which you attack the music. An epic and dynamic sound is accomplished on both albums which you obviously all take very seriously. Is this your favourite type of music to write and record? If so, is it the same for all the guys in the band?

If I speak for myself I’m really influenced by bands like Mercyful Fate, Blue Öyster Cult, AC/DC and Thin Lizzy. Pretty old school, I guess…

Most of us come from a punk and hardcore backround. We all have influences longing from metal – including heavy, stoner, black and doom – to punk, hardcore and emo. If I speak for myself I’m really influenced by bands like Mercyful Fate, Blue Öyster Cult, AC/DC and Thin Lizzy. Pretty old school, I guess. We really enjoy writing instrumental music. Each member played in bands before that had a strong focus on vocals. It’s nice not to think about if someone could sing on the songs. It gives you more possibilities as a composer. No usual song structure, more changes within rhythm and chord structure, all these things. Of course you can do all those stuff with a vocalist too; but it’s very hard to find someone who’s able to deal with it.

With so many descriptions being applied to your music why not just go for straight,’post-rock’ like Godspeed You Black Emperor and Mogwai do? It buys them a wider audience it seems and doesn’t limit you to metal fans, or related genres, which is in no way a bad thing but it can cut off other people who would love what you do.

How about naming it just ‘Ambient Rock N’ Roll’? Just kidding. I think it’s hard to put in a box. We really adore Godspeed and Mogwai but I think we’re more into riffing. So it’s upon the listener to name the genre. A lot of people said that it’s even prog?! I take this as a huge compliment but in my mind progressive rock or metal is something different.

Isis and Neurosis seem to be your closest comparisons musically that I can hear. Are you guys fans of their music and if not, who was it you listened to growing up that mostly influenced you and the music you wanted to play?

Of course we listen to Isis and Neurosis – last time I saw Neurosis was on their tour with YOB in Berlin – I have to admit that I started pretty late listening to both bands. I grew up listening to punk, especially Deutsch punk with bands such as Slime or Daily Terror just to name a few. From there I made my way into hard rock with Guns N’ Roses and Van Halen and digged deeper into the heavy stuff with Pantera, Cannibal Corpse or Benediction. After this came all the classic heavy stuff like Sabbath and Maiden and with this came bands like Mercyful Fate, Blue Öyster Cult and Thin Lizzy to my world.

Why did you decide to go completely instrumental?

We decided to go instrumental at a very early stage when we were still rehearsing as a duo. Basti Grim and me finished the first demo entitled Moder (that’s the closing song from our debut) and played it to some friends who said that it would work without vocals. So we went on, found Pat and Michael and wrote the whole material without vocals.

Once COVID-19 restrictions has eased off, have you plans to tour the UK and Europe extensively to promote ‘Eremit’?

We’ve a tour already booked for February and March 2021 and hopefully we can play all the shows. Most of the shows are in Germany, Austria, Switzerland and Denmark, but we’re really looking forward to play all of Europe and hopefully other territories too. But let’s see how it all will turn out. We can’t wait to play the new songs live.

Apart from the obvious references to the Neander Valley any other reasons why you chose the name?

Our idea behind the name is that NEANDER sounds on the one hand very brutal and raw, but on the other hand even beautiful; when you write neànder with small letters and an accent. It’s a bit conflicting. Same goes with the music. You have all these harsh riffs and blastbeats but also all of these atmospheric parts. We really like to play with variations of light and shade. So the name mirrors the music.

What is the range of ages in the band?

CD, mp3 or vinyl? What are your preferences when buying and releasing music?

We release all three formats. In my mind the best way to listen to music is live and on vinyl. So the LP would be my favourite medium to transport both; music and artwork perfectly. But of course I listen to music on my way to work for instance. So I do streaming too.

Six months to record, Eremit and three years for your debut. Which was more fun?

The first album took us three years in the making because we had to find our style. It was more of a search. On the second album we knew from an early stage where it should go. We wanted to dig deeper into our own style. Limit the scope. So we decided to do it within only six months and really focus on the work. I think the new album is more homogenous and determined than its forerunner. Also it’s more challenging to listen to. Maybe a bit like elderly people? Bigoted, solitary and stubborn. But also with lovely characteristics and a bit wiser.

The first album took us three years in the making because we had to find our style. It was more of a search. On the second album we knew from an early stage where it should go…

The so-called difficult second album doesn’t seem to apply to neànder because of how quickly you produced it but also how really great it sounds. A natural continuation from the first to the second, it seems to flow straight into the new material like the next chapter in a really good book. I congratulate you guys for achieving that and I wondered if now that it’s finally released, do you have any regrets or things you would have changed about the final mixes etc?

Thank you Sir! Between the albums we released a one off 12 inch entitled Malven which was a bit like a signpost to Eremit. On Malven the riffs already got slower and longer and the atmospheric parts got even more beautiful. This song is the bridge between both albums. When I think off our new born, I don’t have any regrets and I’m really happy the way it turned out. Of course you have one or two things you would do different but that’s how it is. You have to finish things. 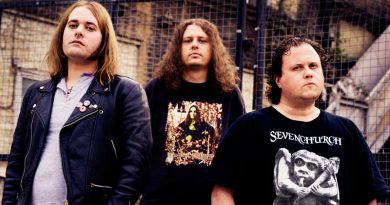 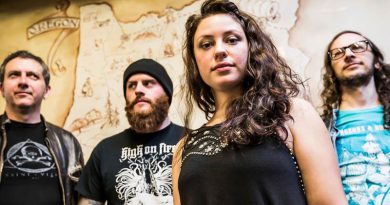 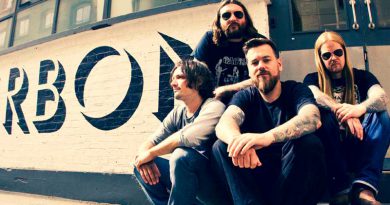