Heath Rave has been playing music since roughly the early 2000’s in bands such as Wolvhammer and Across Tundras. After a half decade hiatus during which time he got sober, Heath started recording again during lockdown and returned with a vengeance with the Lotus Thrones solo project and debut album Lovers In Wartime which was released in July on Disorder Recordings.

The album takes a different approach to the furious black metal that you may have expected from him, incorporating elements of dark noir jazz, industrial, post-punk and classic goth-rock. It’s an album that has been seeing a regular rotation at mine and I’m looking forward to my pre-ordered copy landing at some point. I implore you to pick up the album if you haven’t done so already, you won’t regret it. Heath was also gracious enough to spare some time to answer a few questions…

Hi Heath, welcome to The Sleeping Shaman. Please could you give the readers a synopsis of your career to date?

Thank you for having me! In the early 2000s I was part of the beginning stages of Across Tundras. That went on to be an incredible project. I left Denver in 2005 and moved to Minneapolis. I was part of a short-lived doom project Vernal Pool with Micah Leonetti, then him and I went on to create Wolvhammer in 2008 with Ryan McKern and Andy Schoengrund. I quit Wolvhammer in 2015, got sober, revamped my tattoo career and in late 2020 I started Lotus Thrones.

Deeper Graves’ Open Road made my Sleeping Shaman Top Ten for 2020, given that was a predominantly Jeff Wilson solo affair, were you inspired by Jeff to go the same route when putting together Lotus Thrones?

I’m always inspired by Jeff Wilson, he never stops creating. I didn’t really have an end goal though. It was more of a thing that just happened then ended up finishing and deciding to release after, or close to the end, of the recording process. But when I knew I wanted to release it I went straight to Jeff.

Lotus Thrones was launched as a way of staying creative during lockdown, seeing as Lovers In Wartime marks your return after a five year hiatus, would you say the pandemic paradoxically reignited your love of creating music again?

Definitely. It was the ability to have time to do it. I wouldn’t even say paradoxically, I’d go with directly. I think the worldwide feeling of isolation and fear helped me think about art sonically again. I had gotten the electronic drumset for my birthday, and with the help of my friend Devin Charette of Lunglust, I started to learn about recording through trading files with him and him showing me stuff for fun. Then I bought a guitar and did the Bad Brains cover as an experiment and it all just flowed out of me after that.

From my research (well, a Wikipedia search) I read that a Lotus Throne is a stylized lotus flower used as the seat or base for divine figures in Buddhist/Hindu art. Did you have this in mind when choosing the project’s name?

During the first part of lockdown, I got deep into yoga and eastern spirituality, which really helped me open up to my brighter side and have a mental discipline. I’m not of any religion, but through lockdown I was able to find things that I felt are truth for me, and those things are deeply a part of Lotus Thrones as well. I knew I wanted something that represented that part of me, as it was a rebirth and a natural extension of that journey. There are some passages in the lyrics that are from the Dhammapada and ideas that were inspired by the Bhagavad Gita. The deities themselves are so powerful, and the base on which they sit is incredibly beautiful and filled with strength. The two words together just invoke a mood and emotion.

As noted in my review the exquisite cover-art is by Mixed Media artist/photographer Sally Mills. What was the rationale behind its selection and how do you feel it ties into the album’s themes?

I just knew that I wanted photography for this. I’m enamoured by great photos. I’ve had an ability to fumble my way into a lot of skill sets artistically, but photography just escapes me. I also knew that I wanted an organic feel, but I really didn’t know what. I was deep into the dark macro photography hashtag on Instagram and came upon Sally Mills’ profile and was immediately enamoured. When I saw the claw and the mushroom, I knew that was the cover.

It didn’t’ so much feel like it tied in with a theme as it really was a visual representation of the mood of the music. Lush, but dank. There’s always an underlying sweetness to the smell of decay and that seems to permeate the images that we picked. It just felt right. She’s such an incredible artist with the organic mixed media and immaculate photos. I contacted her directly, we got to talking, bonded over our love of old Genesis, and she allowed me the privilege of some of her images for the record layout.

There are some notable noir jazz influences on the album which were unexpected (not that I’m complaining). What was the inspiration behind this? Is Jazz a genre which, like me, you have found yourself gravitating towards as you’ve gotten older?

I love jazz, Coltrane, Davis and Mingus have always been there. But that’s all I really knew up until a few years ago. The noir stuff has always spoken to me, but I never really could put my finger on it being from a heavy music background. We can obviously go to Kilaminjaro Darkjazz or Bohren and Der Club of Gore, Sunset Mission has been on rotation for over a decade, but I probably got into that around the same time as Hex from Earth.

My passion for it didn’t show up till the last few years though. Interestingly, the series Homeland was what really sent me on a deep dive into modern artists. Not so much noir, but anything with a darker feeling. The main character on the show is deeply manic, and she and her mentor have an affinity for good jazz. Tomasz Stanko did the original opening credits, a song called Terminal 7, and I celebrate his whole catalog now. That helped me find artists like Trigg and Gusset, Black Chamber and Manet.

The season finale helped me discover the incredible Kamasi Washington, who I referenced when I spoke with Bruce Lamont about performing on those particular songs. I actually composed Liberate as a stage for his performance. I think I simply just love the saxophone. It’s primal, bombastic, fun, sad, sexual, you name it. Look at something like Us And Them from Pink Floyd, or even more so The Working Hour from Tears For Fears and you’ll catch the same moods.

The cover of Bad Brains’ I Against I was remarkable and I noted from some of your Instagram posts that you have a fondness for hardcore punk. Are there plans afoot for future reworkings of other such hardcore classics?

Oh gosh, you don’t even know. I’m a hardcore kid at heart, and always will be. There will definitely be more experiments with classic hardcore songs.

As a follow-up to the previous question, are there any intentions to form a Hardcore band?

You know under the right circumstances it would be a dream. I think I’d just want to sing though. That being said I do feel like that influence comes through in some of my writing though. And who’s to say that I can’t do a full on hardcore song in the style of Lotus Thrones. Punk and hardcore is mildly a music style, and mostly a state of honest expression. At least to me and there are absolutely no rules or parameters for this project. It will project what it wishes through me.

Well I’m a recent Philly transplant, but that being said, there is some just amazing stuff out of here. Full Of Hell, Jesus Piece, Nothing and They Are Gutting A Body of Water are all on regular rotation. The new Nothing record is perfect.

there are absolutely no rules or parameters for this project…

What are your immediate plans now that the album has dropped? Have you started writing for the next album or is a (Covid permitting) tour on the cards?

Album two is almost completely demoed and I’ll be going into full production shortly once again with Sanford Parker. Time and Covid permitting I may even do part of it in Chicago at Hypercube along with work in my home studio. Touring isn’t something that’s in the cards for me. I have a wife and a four year old daughter and missing out on that part of my life for any extended period of time just isn’t a sacrifice I’m willing to make. That being said, if a good opportunity for a show arises here and there, I already have the personnel handpicked and ready to jump in with me. I don’t make music to play shows though, I just make music purely for the sake of art.

Shoutout to you Reza for being totally radical and all your support. I also have another record coming out soon with Nat Vershoor of UADA and Jeff Wilson called Altars Of The Moon. It’s a long form piece called Brahmastra, which is based on an ancient Hindu nuclear weapon. I did vocals and lyrics for the project. I’m just so grateful to be here, alive and making music again. The response and support has been humbling and beautiful. Thank you. 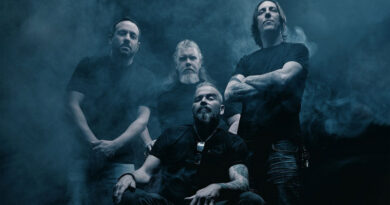 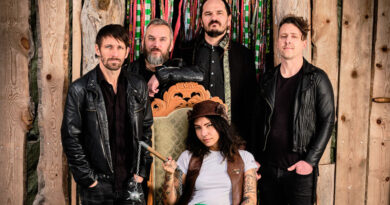