2020. I’d made my career change. I’d switched the steel-capped boots for the ESL classroom, but I was faced with intermittent unemployment as a result of the plague. I decided, pretty much on a whim, to use that extra time writing music reviews for The Shaman. The plan was to strengthen my connection to the independent music community, broaden my musical horizons, and maybe even learn a bit about writing. Twenty-something reviews later, the year’s nearly over, and I’m still a crap writer, but I’ve heard some really exciting music. Here are a few favourites:

10. Narla ‘Till The Weather Changes’

Narla‘s Till The Weather Changes kicks off with irresistibly propulsive rhythms in fine Doors LA Woman style, and ends in gently swirling melancholy. In between is a hypnotic ride through blues-rock, krautrock, and chaotic psych, not to mention some nice country flavours – all delivered with effortless cool and charisma.

9. River Of Snakes ‘Sleight Of Hand’

River Of Snakes are from my city, but I’m a latecomer. Their Bandcamp page lists them as ‘dirgey-noise-melodic-shoegaze rock’, and I can’t top that as a descriptor. Sleight Of Hand snarls and roars, veering from preposterously catchy to nearly atonal. It’s chock-full of 90s world-weariness, and positively oozing grimy Sonic Youth cool.

If you’re in the mood for something simple, raw, and pure, you can’t go wrong with The Magnolia Sessions releases, and this one is my favourite so far. Jason Dea West’s gorgeous acoustic country/folk (review) is built on the foundation of his high, clear vocals, and the exquisite sparkling sound of his resonator. Add an occasional harp, banjo, or backing vocal, and you’ve got something really special.

7. Brimstone Coven ‘The Woes Of A Mortal Earth’

I was pretty pleased with myself when I managed to work a Homer Simpson quote into my review of Brimstone Coven‘s The Woes Of A Mortal Earth: ‘Everyone knows rock attained perfection in 1974.’ If you can relate to that on some level, even ironically, then there’s a fair chance you’ll enjoy this album of elegantly constructed retro-proto doom with fuzzy tones and stately harmonies.

Nest Egg will ensnare you with these unrelenting rhythms, and once you’re hooked, Dislocation will take you on a journey of slowly unfolding textures and subtle dynamics. Shimmering, squalling, and thundering psych and krautrock flavours combine with mournful vocals for an otherworldly album experience.

In a nod to the efforts that artists have made in 2020 to get their music to the world, I’ve chosen this version rather than Shepparton Airplane‘s studio recording. This is the full Sharks album, recorded live during COVID lockdown at iconic Melbourne venue The Tote, sans audience. Whichever one you prefer, you’ll hear a superb combination of pub-rock bluster and caustic post-punk tension.

I had no idea what I was getting myself into when I decided to review the Self-Titled album from The Ditch And The Delta for The Shaman. The stylistic references pointed to genres I’m not generally familiar with, but I’m always keen to learn something new. What I discovered was a harsh and emotionally harrowing album, absolutely bursting with rapid-fire changes and eerie melodies. This is sludgy, belligerent, and very fucking heavy.

Wailin Storms – As the name suggests, Justin Storms does indeed wail on this album. It’s dark, gloomy and funereal. It’s also dense and imposing, like 16 Horsepower birthed from a doom-rock milieu instead of a folk one. Rattle could be the soundtrack to a Southern Gothic film, shot in a palette of bruised blue, and full of unsettling characters living lives of heartache and regret.

What would happen if you decided to play pugnacious punk without the aid of guitar distortion? The answer is Landowner. This music, as better writers than me have pointed out, is geometric. It’s designed and constructed, painstakingly engineered for minimalism. It’s also anxious, aggressive, and sometimes almost unbearably tense. If you’re familiar with Uranium Club, you might have some idea what you’re in for.

Witchskull‘s A Driftwood Cross is a heart starter. There’s a glut of thumping rock, metal, and doom riffs, anguished occult howling, and hair; the whole lot is deftly fashioned into dense, sweaty tunes with real emotional heft. This could be the soundtrack to your next road trip, barbecue, or demon summoning. The tunes will live in your head for days. 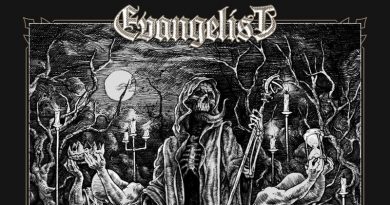