The festival that offers all that is heavy is nearing and we could not be more excited. Roadburn has now announced the running order for the four days of mayhem and is probably preoccupied responding to all sorts of weird requests as your favourite band clashes with your second favourite band!

But then maybe you need a hand, or some pointers, of what’s happening and what it is you can experience over the four days, so that’s why at The Sleeping Shaman we like to bring you a preview for Roadburn 2016. That and of course due to the fact that we’re just as excited as you probably are about visiting this festival and there is no reason we shouldn’t be immersing ourselves before we’re all gathered in Tilburg. Anticipation is half the fun right?

When you look at the running order, you might notice that the Stage01 is missing. The whole 013 will look different actually, so you might be a bit lost during the first few sets. The Main Stage of the venue has increased its capacity by around a third, taking it up to 3000, while the Green Room has doubled and can now hold 700. Unfortunately that capacity was increased by taking away Stage01. But let’s be honest, the tiny stage was a bit too small for some of the bands that performed there in the past, and sometimes just getting into the stage, especially if you didn’t get there early, could be a nightmare in itself.

So how has the organisation solved this? Around the corner from 013 is a venue named Extase, familiar to the visitors of Incubate Festival as a great place for some dark and heavy music. So that’s new. Don’t worry, you can read more about it in the Weirdo Canyon Dispatch zine, which will be available again this year for all you visitors! 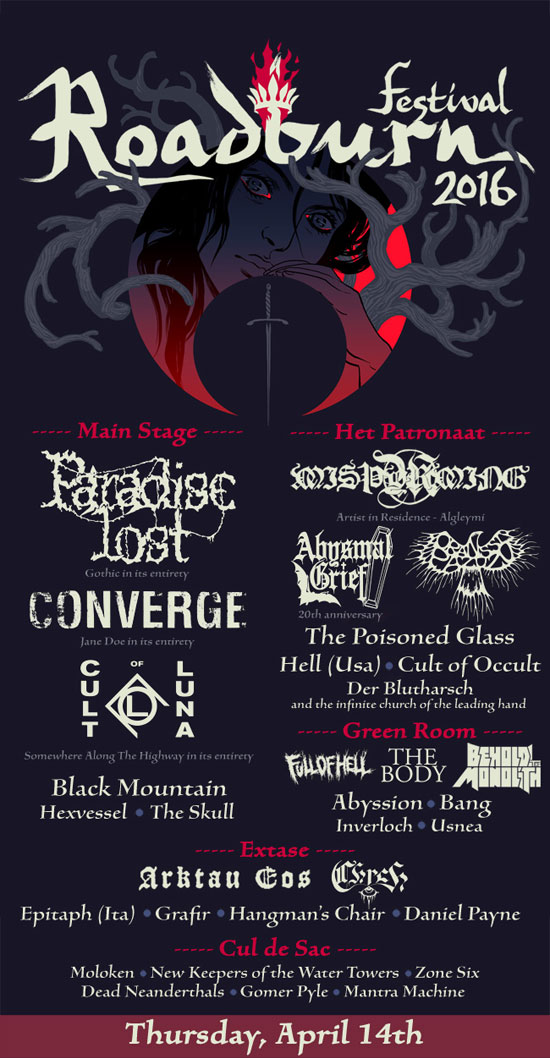 Things To See On Thursday

If you love hearing absolute classics played integrally, Thursday has some great stuff to offer. Be in early for Cult Of Luna, playing Somewhere Along The Highway. Hear hardcore titans Converge play Jane Doe fully and Paradise Lost is presenting you Gothic in its entirety.

Artist in residence is Misþyrming from Iceland. Though Roadburn has a history of putting experienced, established names in this role, it also has a history of doing exactly what it wants, so seeing these guys take up that part is no surprise. They’ll be playing three times during the festival, on the Thursday they’ll be presenting some new and highly anticipated material. Worth seeing for sure if you like that raw black metal sound.

But there’s much more of course. From the harrowing sounds of The Body to the doom-fuelled death metal of Inverloch. Fun fact is that Dutch stoner rockers Gomer Pyle are back together and  Roadburn is one of the places where you can catch them. You’ll find these guys in the Cul De Sac. 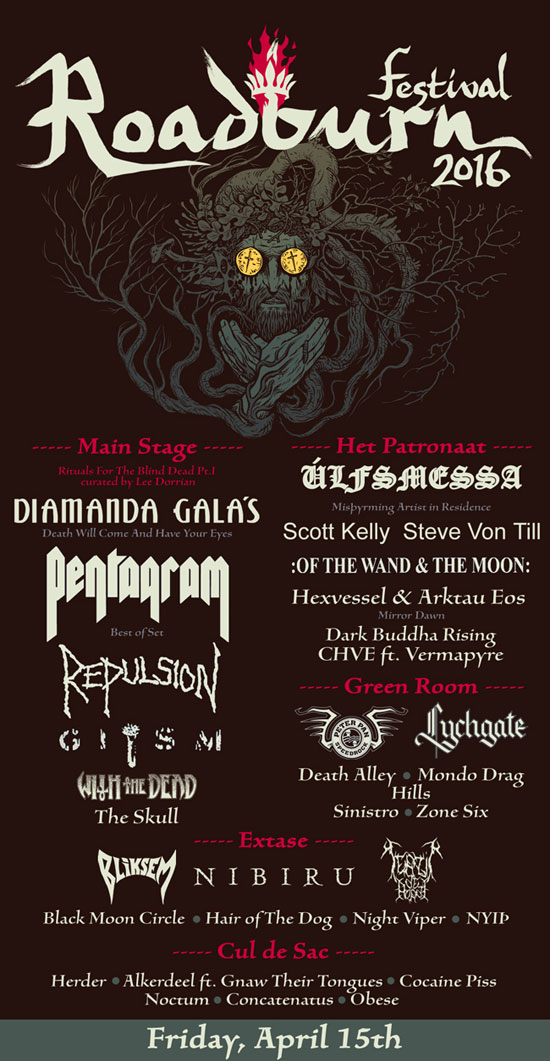 Friday has so much good stuff, that any direction I’d send you off to would be a great success. Especially check out the smaller stages, where Dutch bands like Terzij De Horde, Herder and Death Alley offer their sonic services. Peter Pan Speedrock is also playing and that may be the very last show you’ll see of the Eindhoven Rockcity legends.

On the main stage you’ll only find legendary acts today. Kicking off is the dark majesty of Diamanda Galás, which is reason for you to get out of your bed timely. Pentagram returns gloriously to Roadburn to play some of their timeless tunes and you can enjoy curator Lee Dorrian’s With The Dead. The line-up on the main stage is there for his work today.

My favourite stage for the Friday is Het Patronaat, across the street from the 013. It’s not sheer force that hits you like a brick, as we have Neurosis bosses Steve Von Till and Scott Kelly playing some tunes, but also CHVE from Amenra doing his wonderful solo work. Add Of The Wand And The Moon and you have a great day of dark folklore there. But that’s not all… The joined forces of the Icelandic black metal bands join Misþyrming to present Úlfsmessa. A unique, challenging ritual that shows what the Icelandic black metal scene has to offer. A ritual that should not be missed. 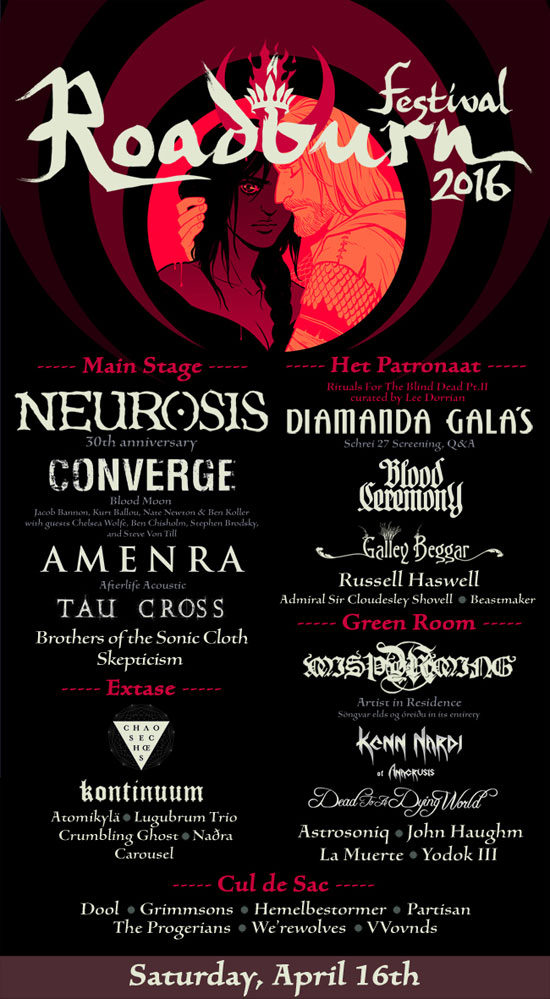 Happy birthday to Neurosis, who celebrate their 30th year in existence in 2016, they’ll play two sets during Roadburn 2016, the first on the Saturday on the main stage and it’s sure to be honoured in an epic way, with a set spanning the whole career of the band. That is of course an absolute highlight, but so are the acoustic set by Amenra and the Blood Moon set by Converge, with guests like Chelsea Wolfe, Ben Chrisholm, Stephen Brodsky and Steve Von Till. This is going to be special guys.

On the other stages, you’ll find Blood Ceremony playing their haunting tunes in the Het Patronaat. The band will have a new album out, which is good news indeed. Iceland’s new shiny diamond Kontinuum will be playing in Extase, which offers a unique opportunity to see the band in such a small setting.

Misþyrming will play their final show this day, playing their smashing debut album in its entirety. Aslo pretty cool to check out is Astrosoniq. The Dutch space rockers are returning to full form this Roadburn after a few years of inactivity. Oh and Roadburn’s head honcho Walter Hoeijmakers will be doing their visuals. Chaos Echoes will also be playing their full album Transient with their jump into the unknown. Also be sure to check out Belgium black metallers Lugubrum Trio who close the day at Extase with an intriguing bit of music.

The Afterburner is not for the weak. It’s for those left standing after a continuous sonic onslaught for three days, so if you manage to check it out, there’s always some gems for you.

Obviously, you’ll find some on the main stage. Neurosis will continue their birthday party with some more songs from their 30-year spanning career and also Amenra will play one of their fabulous live shows. Opening up very early is Green Carnation, who will be playing their Light Of Day, Day Of Darkness album in full. Well worth hanging around the main stage, regardless of fatigue.

There’s more to be found though, like the band Blind Idiot God, who happen to be that distinct weird band Roadburn loves so much. Do you know what astrosludge sounds like? Neither do I, but if you go see Menhir play in the Cul De Sac, you’ll know. Buried At Sea, featuring none other than Sanford Parker, will bring their sonic dirges, for the first time to Europe, when they close out the main stage of the 013 on Sunday night, then as a final and surely fulfilling act, the band Death Alley will play a second set ending Roadburn with a bang.

Surely, you are aware how the schedule can change and there are tons of great acts that I even forgot to mention now, but we’re excited and hopefully you are too, so enjoy this great edition of Roadburn. See ya in Tilburg (come say hi!).

Mark Hunt-Bryden And His Top Ten Albums Of 2015