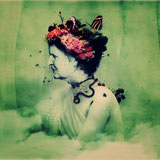 I remember hearing Sleep’s ‘Jerusalem’ (it wasn’t re-released as Dopesmoker yet) and Electric Wizard’s ‘Dopethrone’ years ago and being completely blown away by the sheer heaviness of both those albums. A whole scene of heavy stoner doom arose, but none came close to the heavy groove of these two gods.

I think that with Monolord, stoner doom no longer has two gods but a holy trinity. ‘Empress Rising’ sits perfectly in between afore mentioned albums. It has the skull crushing heaviness of ‘Dopethrone’ and the drugged out feel of Sleep’s opus, with a bunch of psychedelic effects thrown in for good measure.

Opening song ‘Empress Rising’ instantly takes you to the realms of that caterpillar from Alice in Wonderland. The sound is so huge that I feel dwarfed in its presence. My limbs go slightly numb and my head starts bobbing uncontrollably. It will not stop until this whole album is over. The drums and bass combine into one massive sledgehammer, pounding me further and further into a stoned oblivion.

It is hard to believe these three Swedes started this band as a side project in 2013. It sounds like a band that has been going for years, a band that knows its strengths and weaknesses. The musicians sound like they have been jamming together since their teens, yet all we hear is so fresh and new, amazing!

The third track ‘Harbinger Of Death‘ sounds slightly nastier than the previous two tracks, more fitting of such a title. The first riff is one of those instant classics, befitting any Black Sabbath album, the spaced out vocals reverberate through space and time and have that mantra like feeling Sleep had on ‘Jerusalem‘.

Monolord keep this deadly groove throughout the entire album, never slowing down to funeral doom territory, never speeding up to a more pure stoner rock pace. In this way they force you to keep swaying with the groove, your neck hurting from exhaustion and fatigue. This must crush everything in sight on a stage. I wonder if there are venues strong enough to withstand the subsonic vibrations and utter groove of these guys.

On ‘Icon’, we find the same deadly riffing and groove, but at the 4.40 mark the guitars stop and bass and drums set down a hypnotising rhythm. Echoing vocals emerge from the dust of time and space and call me to join in the cosmic dance of life and death. When I do, the guitars come back and the crushing continues.

Last track is ‘Watchers Of The Waste’. The title is fitting I think, as by this time there is not much left of my surroundings. Everything is bulldozed to rubble. There is smoke all around. A weird smoke, a combination of weed, incense and the dust clouds of collapsing buildings. After six minutes a sample signals in one of the most monstrous riffs of the entire album. It feels like drifting on a sea, but the waves have been replaced by mountains, water has turned to stone. This riff takes me down into the deep and grinds me down until nothing is left of me.

Monolord have created a future classic with ‘Empress Rising’ and I strongly recommend anyone that likes Electric Wizard or Sleep to go get this now!