Voivod named their curated event at Roadburn Festival 2012, Au-delà du Réel, after the band’s favorite sci-fi show, The Outer Limits, when it was broadcast in french during the 70s. As curator, Voivod will personally select the bands that will play during Au-delà du Réel, set for Friday, April 13 at the 013 venue in Tilburg, Holland. 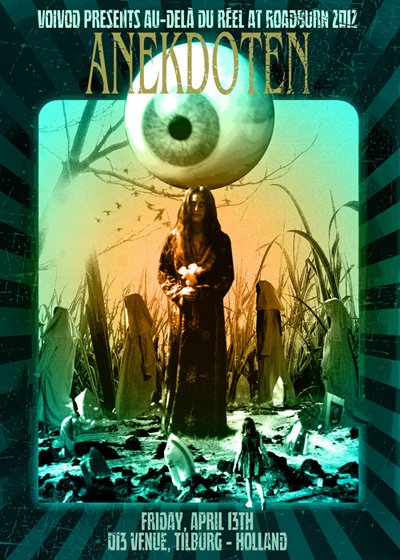 Voivod‘s excited to announce that Sweden’s Anekdoten has been confirmed for Au-delà du Réel. Anekdoten ranks amongst the very best prog-bands to emerge from Scandinavia since the early 90s. Firmly rooted in King Crimson-inspired, Mellotron-drenched prog/art-rock (with hints of Pink Floyd and Jethro Tull as well), the band has released several acclaimed albums that garnered them a devoted cult-following over the years.

Roadburn are also excited to announce that Gnod and Spiders have joined the lineup for Roadburn Festival 2012. 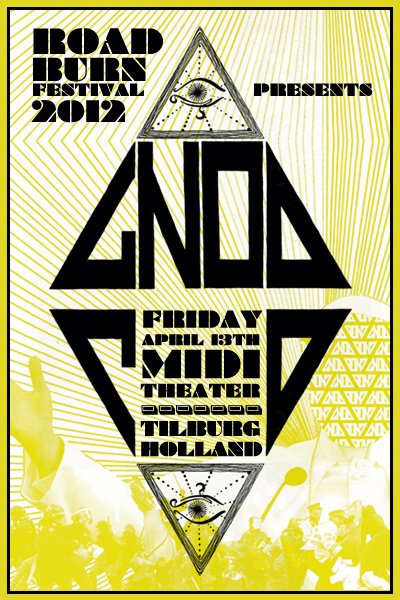 It’s really hard to pin down Salford UK’s psych/metal renegades Gnod, as their their distinctive take on psychedelia is not just otherworldly, but also grounded in terrestrial styles like Afro-beat, krautrock, drone, jazz, space rock and even dance music. Gnod excels at the illusion of repetition whereby its motorik rhythms underpin a myriad of shifting hypnotic textures. As of now, Gnod have released approx. twelve full-length albums, each seemingly materializing from the aether, as the band is surrounded in mysticism. Their lengthy live-jams are created by an ever changing cast, of which there is hardly any information available.

However, Gnod will leave their collective residency at Salford’s Islington Mill — a creative arts space where they live and rehearse — to fog our brains and eyeballs with a wash of hallucinations, while enticing our bodies to lose control to the propulsive, repetitive beats at the very same time. Gnod will play Roadburn 2012 on Friday, April 13th.

With  our fondness for Swedish rock (we have invited the likes of  Witchcraft, Graveyard, Dead Man, Horisont and Troubled Hourse et al,  to previous festivals) it’s not surprising that Spiders are appearing at this years Roadburn… and not just because they are Swedish,  because they are that good! Spiders will appear on Thursday, April 12th. 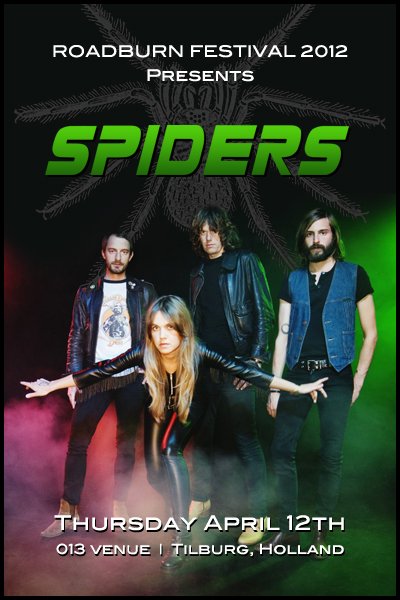 Combining poisonous and massive riffs, dirty beats and crushing low end with huge banks of distorted synths, a touch of psychedelia, plus experimental, ambient soundscapes, UK’s Necro Deathmort has equal passion for electronic and extreme music. This London based duo have released two striking albums offering a new soundtrack to your nightmares, This Beat Is Necrotronic and Music of Bleak Origin — both are disturbing and soothing in equal measure.

If the names of Neurosis, Ulver, Atilla Csihar or Lustmord mean anything to you, then Necro Deathmort deserves to be on your radar as well, as their mix of the subtle and the extreme, the sublime and the physically repellent is just as remarkable as their peers. Necro Deathmort will perform on Saturday, April 14th. 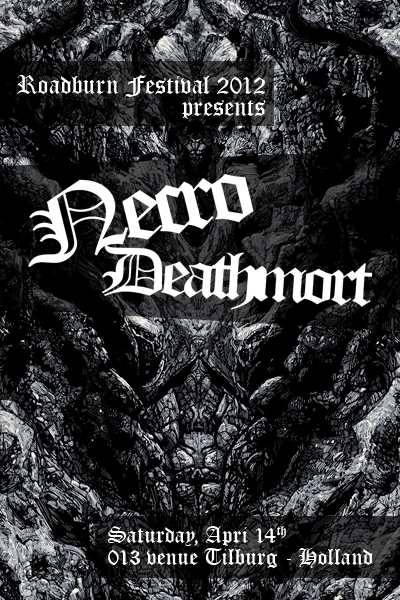