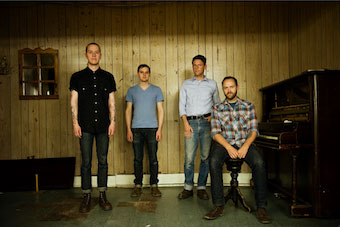 Constellation have made no secret of their priority release this Autumn, Siskiyou’s heart-warming Keep Away The Dead and to mark the release of the album, this November the band are touring all across the UK and have unleashed some extra special video footage and MP3 material for you to absorb. Hopefully you will come to love them as much as we do!

Check out the assets and read more about the album below…

“Twigs And Stones” is available as a giveaway MP3 which you can listen to at your will.

The band have unleashed a brand new video for the song ‘Dead Right Now’ off the new album, you can stream it below or view it on Vimeo.

One of the album highlights is a cover of Neil Young’s ‘Revolution Blues’, a performance video of this song and ‘Inside Of The Ocean’ by Mitch Fillion can be streamed below or viewed on Southern Souls.

In 2010, Siskiyou unleashed their debut for those of you who may be interested, you can hear it in full on Soundcloud here where it is currently being streamed in its entirety.

Meanwhile, here is more information about their 2011 album Keep Away The Dead…

Even as Siskiyou’s first record was delivered to Constellation in early 2010 and getting prepped for release that fall, Colin Huebert remained holed up in Mara, BC (pop. 350) through the winter, writing more songs and eventually being joined by his Siskiyou co-conspirator Erik Arnesen for a few weeks of intensive recording. Unlike the material on their eponymous debut, which was largely recorded in nomadic fashion while Colin and Erik toured as members of Great Lake Swimmers, the Mara, BC sessions found the pair settled, rooted and with keys in hand to the century-old Mara Community Hall.

Most of the tunes on Keep Away The Dead were born at Mara Hall, where bed tracks were laid down in the crisp air during depth of winter. The arctic atmosphere of that empty, cavernous, hardwood structure was the perfect complement to Huebert’s sensibility: a tense and acute restraint; a shivering, biting, sometimes bitter rending of barebones, folk-inflected rock music. (Neil Young remains a clear touchstone – overtly so with the album’s cover of “Revolution Blues” – as do the pointed, starkly controlled arrangements and textures of contemporaries like Angels Of Light.)

Huebert left Mara in spring 2010 and moved to Vancouver, where Siskiyou began to take shape as a full band with the addition of Shaunn Watt and Peter Carruthers. Coming off a season of extensive touring in Europe and Canada in fall 2010, Siskiyou had coalesced into an incisive quartet and hit Vancouver’s JC/DC Studio in early 2011 with engineer David Carswell (Destroyer, New Pornographers), adding to the previous year’s Mara sessions and cutting two more tunes for which Carswell ran the mix: “Twigs And Stones” and “Revolution Blues”. Huebert recorded and mixed the remainder of Keep Away The Dead (as he did on the previous record).

Where Siskiyou’s debut was a stunning little scrapbook of short, sharp tunes, Keep Away The Dead ramps things up with subtle care and clarity, yielding something closer to a rural gothic novella in spirit and scope. The album is a strikingly cold-eyed, tender-hearted song cycle, marked by quiet defiance and desperation. Huebert’s acoustic guitar and gently acetic voice, Arnesen’s gorgeous banjo and treated guitar lines, and the judicious rhythm section of Watt and Carruthers deliver a superbly compelling album on the knife’s edge of darkness, where each tune feels like another precious log thrown on a lone campfire burning in the cold night.