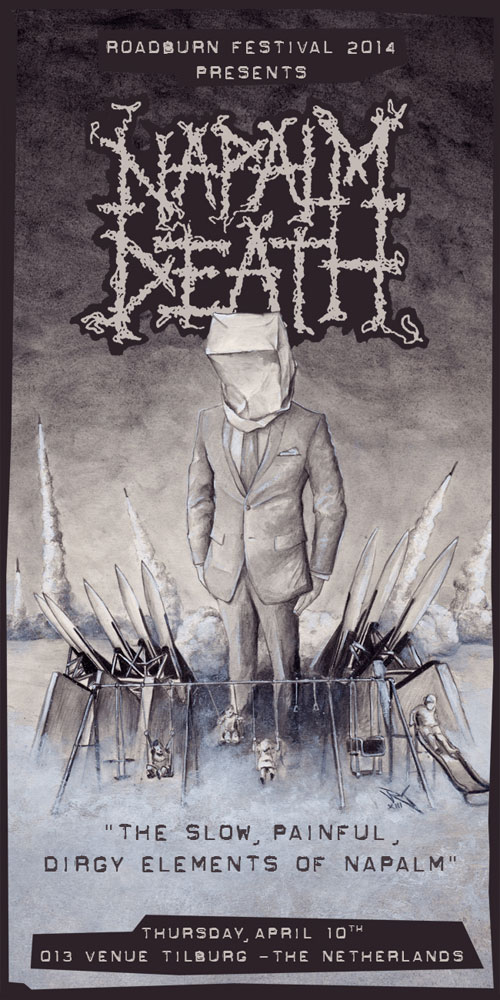 Legendary Grindcore veterans Napalm Death will be crashing into Roadburn 2014 with a set highlighting the more experimental moments of their extensive back-catalogue on Thursday, April 10th at the 013 venue in Tilburg, The Netherlands.

From 1994′s Fear, Emptiness, Despair onwards, the grind stalwarts have been regularly introducing more outre elements into their sound, offsetting their blistering speed with moments derived from the bands shared love of left-field sounds from the stranger end of the hardcore, industrial and alternative-rock scenes, and in 2014 they will be bringing this other side of the band’s sound to the fore in a special set especially for Roadburn.

Frontman Mark ‘Barney’ Greenway has this to say:  ”The common currency of Napalm is clearly the fast and the furious, but as Roadburn likes to peel away the layers to find the quirks in its performers, we have decided to attempt bringing to the fore the slow, painful, dirgy elements of Napalm that sometimes get partially obscured by the speed factor.

We have a number of songs, you could say, from the ‘no-wave’ stable heavily dripping in the sounds of Swans / Coil / My Bloody Valentine et al and will yank those out of the archives to try and construct something resembling a set.

Then, just as the audience are about to jump off the nearest building amidst the abject despair, we’ll probably machine-gun it all with a few bursts of dependable speed. Job done.”