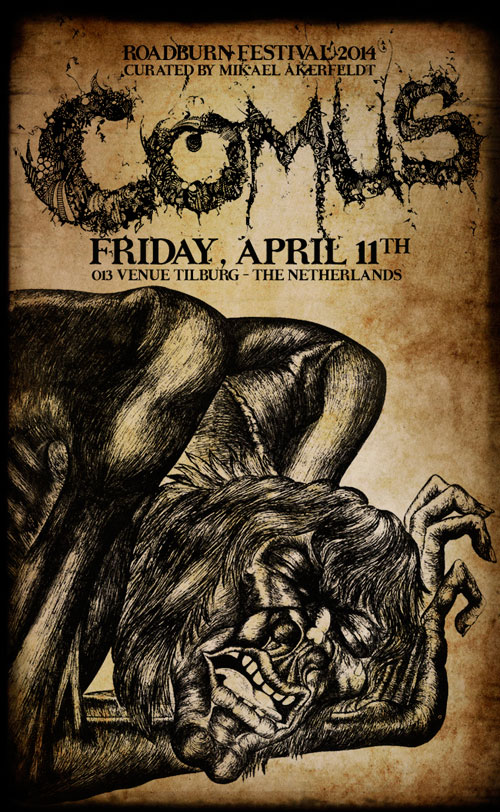 The Roadburn Crew are beyond thrilled to announce that psychedelic folk legends Comus have been confirmed for Mikael Åkerfeldt‘s curated 2014 Roadburn event on Friday, April 11th at the 013 venue in Tilburg, The Netherlands.

”Hymen hunter, hands of steel, crack you open and your red flesh peel”. ”Is it a death metal lyric?”, says Mikael Åkerfeldt, ”No it’s psychedelic folk. Ladies and gentlemen, welcome to the eerie yet beautiful world of Comus!”

”You’ll never be the same again.”

”I personally hold Comus debut LP ‘First Utterance’ as the pinnacle release of the genre. It’s just utterly amazing and has rubbed off on me musically in so many ways.

A timeless masterpiece, if anything. Their debut record from 1971 is like a family friend by now and their 1974 follow-up ‘To Keep From Crying’ is an underrated gem that deserves your attention. This was their swansong for many years until we saw their glorious return a few years back both as a live band as well as top of the range recording artists with their amazing ‘Out Of The Coma’ LP.

I’m extremely happy to announce the return of Comus to the main stage of the 013 venue in Tilburg and the Roadburn festival. I’m salivating myself. I’ve witnessed them live once and I fucking cried! Happy tears, I might add! I simply cannot wait to experience the magic that is Comus again next year. Hope you’re just as excited as me.”