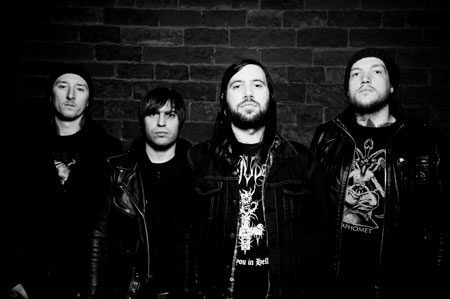 If one ever needs a prompt that apocalypse is near, a session with Italy’s most destructive musical force will certainly reinforce the thought.

Since 2003 THE SECRET has waged musical warfare with their incendiary brew of blasting, metallic hatred, their songs growing sonically more caustic and lyrically more impatient with the human race with each studio offering. The band combines elements of crust/grind, primitive black metal, dark soundscapes and monolithic riffs to take the listener by the hand through a hallucinated trip towards a foggy and yet invisible tomorrow. So as the end of the world is supposedly upon us in 2012, what more appropriate time would there be than now to attack the planet with a new LP from this hateful act?

THE SECRET’s attack is more corrosive and convincing than ever on the newly completed Agnus Dei. As with their third album Solve Et Coagula, the new opus was recorded by Kurt Ballou (High on Fire, Converge, Black Breath) at Godcity Studios, resulting in a blasphemous titan that is without question their heaviest, and most filthy crust-ridden recording to date. Swelling with thirteen unstoppable new anthems in under forty-five minutes, Angus Dei will prove itself to be the most hateful release from this killing machine to date, as every album in their discography has.

With a North American release date of 23rd October & UK/EU 5th November now confirmed for the release of Agnus Dei, the heavy supporters of THE SECRET over at Brooklyn Vegan have hosted an exclusive premiere of the album’s opening title track. Experience the collapse of the planet with “Angus Dei” RIGHT HERE.

Following two albums via Goodfellow Records, THE SECRET was picked up by Southern Lord for the release of 2010’s Solve Et Coagula LP. The record yielded massive amounts of bewildered praise from media outlets and fans across the planet, and opened the band up to a whole new level of international touring alongside such acts as Kvelertak, Converge and sunn 0))), and this Summer’s American Southern Lord label package tour alongside Enabler, Burning Love, Martyrdöd, Black Breath and more. The band will continue to pulverize audiences with their unstoppable live show in support of Agnus Dei through the New Year, or until the supposed pending Apocalypse later this year will permit, including a forthcoming European tour supporting Converge, Touché Amoré and A Storm of Light in November and December.

Årabrot / Rabbits / Bastard Of The Skies Tonight At The Star & Garter, Manchester!