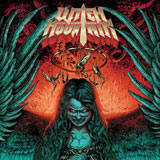 I’ll readily admit that I will always be biased when it comes to Witch Mountain. When I first heard Cauldron Of The Wild, I was pretty much hooked.

It’s not just Uta Plotkin’s phenomenal voice, the soul and incredible range she displays readily in every line; it wasn’t the narrative-driven charm of Lanky Rae, or the immediacy of Shelter; it wasn’t even the effortless finesse with which the band dredged up ZZ Top and Thin Lizzy and Goatsnake in a massive hot-pot of doom-spiced deliciousness – it was more that they just got it. They knew what made a good doom album, and on Mobile Of Angels, they sure as hell haven’t forgotten it either.

For the most part, Mobile Of Angels ticks all the same boxes as its predecessor, and yet the two are remarkably different beasts. Each song here is a much more gradually development of sound, taking its time to flesh out Plotkin’s vocal nuances and let its sometimes intense emotional content wash over and slowly drown the listener. It feels like the perfect combination of two distinct emotional forces – the wrathful virtuosity of Plotkin and the finely crafted doom of Rob Wrong, a sound steeped in American tradition yet swelling with life and immediacy. This is US doom operating at optimal conditions, Nate Carson’s slo-mo fills possessing a natural bounce that prevents stagnation while for every guttural, painfully drawn-out riff of Wrong, he is able to balance it out with fluid, classic-sounding leads that kick up the tempo and the flow of the music, making it a sonic rollercoaster of sufficient turbulence to match Plotkin’s inner workings.

While the songs are certainly more ambitious, showing not only a desire for greater length but also variation as each track takes its own circuitous route to redemption, it’s Plotkin herself who shows the greatest evolution since Cauldron… This feels like her album, in many ways. The narrative of Lanky Rae and Aurelia has been abandoned in favour of personal revelation, the virtuosity has been toned down (albeit marginally) to allow for a more natural, though unpredictable delivery, and there are even a few touches of her work with Aranya there for anyone who cares to listen, Psycho Animundi possessing elements of that same psychedelic spiritualism while the brief title track is practically steeped in it as she delivers solemn liturgies, priestess and destroyer as one, over rippling, twisting guitars.

This more introspective approach fits the music remarkably well; it only makes sense, really, that music so firmly entrenched in the blues should sound like the blues, right? Your Corrupt Ways (Sour The Hymn) sells this notion completely, Plotkin’s tender and broken croon sounding just as pained as Wrong’s soulful, shifting licks, and when she sings “You say you’ll fix me / You’ll mould me in your image” before adding a defiant exclamation of “Like hell you will” it feel like a moment that Witch Mountain had been looking for all along. It has fire, soul and misery all intertwined in its air of sorrow, and it’s just damn doom.

Mobile Of Angels is an album that’s filled with moments like these. It’s fluid, flawlessly executed and it has as much heart in it as tradition, which is something that often feels lost with even the more accomplished doom bands out there. Hell, even the cover of Mountain’s Don’t Look Now is executed with that same reverence and panache, its thunderous spirit and splashes of colour perhaps not in keeping with the album’s sorrowful spirit though certainly making for a delicious treat, and closer The Shape Truth Takes is one of the most lush, heart-strainingly gorgeous songs in heavy music history, the faint cracks in the vocals just as integral as the solid interplay between Carson and Charles Dingus and Wrong’s epic, 80s-inspired lead work.

This isn’t Cauldron… Mk. II, but it’s also unlikely to lose anyone who was sucked in the last time. It’s superior in almost every respect, from the quality and breadth of its songwriting, to the cohesion of its four players and their individual contributions, and in this respect it’s probably their finest work to date. Leaving an album like this certainly makes Plotkin’s departure a bittersweet one, but as far as legacies go, this is a hell of a high note to leave on.