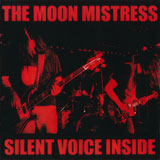 There’s rarely an album in my collection getting rotation as heavy as the first The Moon Mistress full-length has in the past month or so. Since I’ve been following the band for quite a while now, it was definitely one of the most anticipated releases of the year for me, which also means I can’t be a truly impartial judge for it – but on the other hand, who would suffer from disappointment more than a loyal devotee who expects nothing but the stunning grandeur from the subject of admiration? Now we have sorted that out (kinda), let’s get to the business.

Hailing from the citadel of the Evil Empire, The Moon Mistress borrows from the bleak industrial landscapes, ancient orgiastic rituals, visions of Kali-Yuga approaching and the flames of eternal damnation reflected in the blind stare of hallucinating narcomaniac to yield the rotten fruit of raw and twisted doom metal with primitive aesthetics and lo-fi approach to the sound production. Combining that creeping snail speed grooves with brooding guitar leads that are more likely supposed to shake your mind loose than represent some actual melody, strengthened with the blistering live performance has become their trademark on the local scene.

As time went by, the band introduced new songs to the audience showing the hint of variety among the wastelands of spiritual death with more fast-paced and at times a lot angrier sound, while the early songs have been transformed and rearranged in concordance with an actual song writing intent. Last April the trio entered Red Gates chamber to record almost an hour of “Silent Voice Inside” which was mastered and produced completely on their own over the next few months. After discussing various record deal issues, it was decided to release the album on the band’s drummer Mitya’s own label, Pestis Insaniae Records, completing hand-crafted independent art concept.

The front cover shot in red scale is full of raw energy behind the static picture bringing to mind images from Ramesses’ “Possessed By The Rise Of Magik” or even Nirvana’s “Bleach” and represents what the band is about in a truly honest way. Sound-wise, compared to the demo and “Obsessed By Cursed Wastelands” split, The Moon Mistress goes much lower, incorporating a very thick and solid bass driven sound. The opening section starting with droning feedback eventually growing into a kind of tribal percussion sets the listener in the right mood for the deeper experience as “Cremation Meditation” kicks in with the heavy treads of groundbreaking, pummeling and clear vocals that evolve into bursts of screaming over crushing barbarian riffing.

Slow down, now that you have your consciousness burnt down in the purifying funeral pyre, let the shadows crawl into your mind with “The Wicker Man” twisted tones. The song is distinctive, if not definitive for the band’s earlier sound with its sick guitar leads coming from some really demented dimensions far beyond rational mind’s capacity of apprehension.

Fourth track, “Cease To Exist” is probably the fastest on this CD, rough, stripped-down rocking with catchy refrain bringing to mind some old Pentagram (or is it just me?) which closes with the darker mid-paced part. Slow down once more, this time for leisurely chanting of “Invocation To Hecate” ornamented with the sort of oriental melodic pattern which seems to have become pretty common to the band lately.

Second half of the album opens with the short interlude resembling the opening tune with tribal drumming and amplifier worship maintaining atmosphere and ambience while “Samsara” takes over with the swirling wah-bass attack and full force bludgeoning drums.

Both “Silent Voice Inside” and “The Moon Mistress” are somehow typical for the band and showcases what they are best at: slow, heavy doom metal, inspired by and dedicated to the Divine Mother. With a running time of sixty three minutes, The Moon Mistress manages to captivate the listener throughout the entire listen. It seems natural to come to the conclusion that the band has excelled in their style of doom metal which is carefully documented on “Silent Voice Inside”. Honestly I can’t imagine a better way to spend an hour (or two).