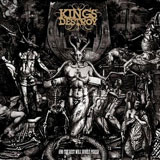 Those of you with functioning long-term memories may remember how wildly I enthused about Kings Destroy’s debut seven inch, ‘Old Yeller/Medusa’, on this very website, back in the mists of time. You may also remember how much I said I was looking forward to their debut full-length recording – go on, I’ll wait here while you go and find it to read again – well, here we are a little over 12 months later and it’s finally here in my sweaty mitts! Was it worth the wait? Read on….

Yes. It totally was. There was never a doubt in my mind that Kings Destroy would deliver a solid album of heavy as lead rockin’ doom metal, and THAT is exactly what they have done. ‘And The Rest Will Surely Perish’ is forty-five minutes of absolutely first rate DOOM. Fans of Goatsnake, Trouble, the doomier side of the Melvins and Saint Vitus’ more upbeat material will lap this up.

Kings Destroy don’t pen sprawling epics, the eight tracks here average out at around five minutes, with the longest being a little over seven minutes long – take THAT boring epic doomsters! No flab on THESE tunes, just pure muscle and sinew. The rhythm section of drummer Rob Sefcik and bassist Ed Bocchino are like a well-oiled machine, keeping the engine room a-running and giving each track the drive needed to smash it home like a wrecking ball. Guitarists Carl Porcaro and Chris Skowronski are no flashy show-offs, every riff, chord or lick is in total service of the SOUND as a whole. Sure we get the odd guitar lead, but nothing is wasted, everything WORKS.

The band’s not-so-secret weapon is vocalist Steve Murphy, man of a thousand voices….well…maybe not a THOUSAND, but you catch my drift. He’s able to use his voice like an instrument and add a sense of real individuality and depth to the sound of the band. Sure, his voice isn’t a real lung-buster, but he clearly has the flexibility and imagination he needs to be able to really help make Kings Destroy stand out even further…not that they needed much help. He can DO Ozzy, he can do Eric Wagner-esque tones, he can turn on the grit when he needs to, and on a track like the Kyuss-esque ‘Medusa’ he just sounds deranged, like a heavily drugged John Lydon. Hell, he even throws in a wee hint of the Reverend Neil Fallon on the bluesy shuffle that is ‘Stung’. But all the while, he still sounds like HIMSELF. As I say, he adds the shine to Kings Destroy’s already highly buffed surface.

The whole shebang kicks off with chiming guitars leading into the swampy doom groove of ‘The Mountie’, a perfect lead-in with some deftly placed tripped-out phasing and flanging leads and a ‘When The Levee Breaks’ rhythmic feel. ‘Dusty Mummy’ is the seven minute ‘epic’ here, moving from a mournfully downbeat lo-fi riff of minimalism into a Melvins, circa ‘Ozma’, style pounder with a seriously doomed edge and a very tasteful solo outro. ‘The Whittler’ has that kinda rolling feel that the Melvins ‘Set Me Straight’ has, offset with some tasty Trouble-y harmonising flourishes over a killer thrumming doom-pulse, and ‘Planet XXY’ has an aggressive chugging snarl to it and more of that tasty harmonising guitar that I love so much.

‘Medusa’ , originally on the flip-side of the debut seven inch, still sounds great – I really love the section where phasing sounds span a canyon of hanging chords – ‘Stung’, as I said earlier, is a bluesy shuffle with a Clutch vibe to it, and ‘Two Tons’ is a classy Sabs riffer that shifts gears effortlessly. Debut seven inch lead-off ‘Old Yeller’ ends the record in fine style, being as it is a tombstone-heavy slab of doomiosity with a seriously strong guitar performance from both axemen, wah-wahs ahoy!

So there it is – a lean, mean dooming machine with not an ounce of fat on its muscular frame. This is one I’ll still be listening to in a good few years time and I hope I’ve prompted a few of you to go forth and seek it out. I guarantee you’ll love it….and don’t call me shirley. 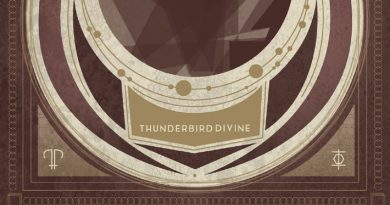