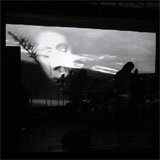 There’s a visceral beauty at work as Sonance wring twisted leaden sludge and floating spectral ambience seemingly from the very air that surrounds them. The violent, jarring nature of the lurch from low-key ethereal beauty into ugly, jagged, bruising riffs is such that the band transcends the obvious ‘Post Rock/Metal’ tag, with its LOUD-quiet-LOUD aesthetic, and puts them closer to the avant-garde territory of Khanate and their far-too-thin-on-the-ground kin.

Isis Sonance are emphatically NOT – too abrupt and unpleasant are their tonal shifts, and too filthy are their discordant guitars. To these ears, Sonance exist at a halfway point between the art-sludge of Khanate and the apocalyptic bombast and ghostly drone of Neurosis, circa Enemy Of The Sun, which is a pretty damn good place to be, in my humble opinion.

Essentially one forty-two minute long piece split more or less down the middle– labelled ‘Side A’ and ‘Side B’ presumably due to a plan to release Like Ghosts on vinyl at some point – Like Ghosts fades in with thirty seconds of low-key buzzing microtonal drone that almost literally suddenly explodes into a violent outpouring of ragged guitars, depth charging bass, militaristic drums and feral growling that sounds for all the world like Swans ‘Beautiful Child‘ being played through Corrupted’s gear and overrun by ravening beasts.

A good start, I thought.

However, as quickly as it emerged, the hydra-headed beast recedes into calmer waters, giving way to an almost placid soundscape of twinkling guitars and edge-of-hearing, more-felt-than-heard, discomforting ambience. Something is just off, nothing overt, but still….something. We coast along a little until the ugly guitars begin to play and those bestial vocals begin to growl and shriek again, following up on that ‘not right’ feeling well and good.

The riff is like some bastard offspring of Tool’s ‘Forty-Six And Two’ and Neurosis’ ‘Locust Star’ but doesn’t hang around long, being jerked out of existence by huge, jagged rhythmic chasms, falling back into disordered place as nothing but atonal discords hanging in dead air underneath cavernous, shuddering bass and forcefully minimalist drumming.

This would be as good a place as any to discuss the vocals of ‘Tom’ – It’s all first name basis with Sonance – as they are at their clearest and most forceful here. Now, this is often where bands of this ilk let themselves down as no matter how interesting your music may be, saddle yourself with a generic screaming sludge vocalist or yet another ‘LOUD-quiet-LOUD’ merchant and you’re on a one-way ticket to forgetfulville, but Tom here is cut from a finer cloth than that. Actually, I won’t say ‘finer cloth’, I’ll say ‘phlegm-and-blood-drenched oily cumrag’, as his voice is just plain nasty. Painful on the ears…which is how it should be.

There is a snarling bite to Tom’s highly abrasive vocalising that puts me greatly in mind of Bloody Kev of the late, great UK Grind/Powerviolence champs Hard To Swallow, and certainly more than a touch of his Iron Monkey compatriot Johnny Morrow when he really lets rip with throat-shredding verve. Far from being a one-trick pony though, Tom switches down to a barely audible monotonous whisper during the hanging, shuddering abyssal sections that litter the midsection of ‘Side A’ to great effect, joining with disconcerting sound effects to add a decidedly uncomfortable edge to proceedings, and also adopting a whispering croon during the less fraught moments that follow.

Those afore-mentioned placid moments eventually build into a crushing, lurching rhythmic steamroller, driven by nagging, insistent high-end atonal guitar and a relentlessly rolling rhythm section, as all the while muffled screams struggle to emerge from the cloying tar-black sound that almost engulfs everything.

After that, ‘Side B‘ is quite the breath of fresh air….for the most part. A shimmering, subtly roiling organic drone that touches on Godspeed You! Black Emperor territory stretches out and gradually subsides over the course of ten minutes until all that remains are what appear to be field recordings of natural sounds – rain, running water et al – and unidentifiable subtle knocking and crunching noises. These sounds hover on the very edge of audibility before guitars, bass, drums and vocals come pounding in, obliterating any sense of subtlety or nuance, wiping everything out with seriously overloaded distortion and full-on screaming. It’s actually a beautiful moment, made all the more violent and alarming due to the ear having shifted into closer listening mode whilst attempting to pick sounds out of the field recordings that preceded it. Very clever indeed, you evil bastards.

A buried shard of almost-melody surfaces within the violent smashing and pounding, coming to the fore and taking us through nearly to the end of the track until that too is dissolved in the corrosive audio acid that Sonance pour out so effortlessly, leaving only a twitching, mangled heap of fuzzing bass, crashing drums and inhuman yelling. The very end comes swiftly and abruptly, cutting things off dead.

There will be no survivors.