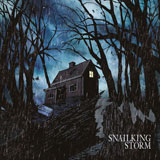 Am I allowed to review music? Let me rephrase that slightly differently. Am I, as reviewer, just a fan, or am I an outsider, with no idea why and how assembled sounds are created? Nay, I perform music myself, I love smashing cymbals and fibred wood! Maybe a lover of different ways of assembling and enjoying organized sounds then, pretentious enough to think I’m qualified to comment? Or am I really some sort of wizard, equipped with synesthetic crystal ball and auditory magnifying glass, and as such able to peer deep into the workings of organized sounds in order to verbally convey its intended and actual results upon the listener?

Nay, ‘tis all about feeling, they say. Fuck posh words – the creation and enjoyment of music is at its core a direct and simple thing and it always will be for us bipeds. Reviewing is easy: write down the band’s bio, talk about sound and songwriting a bit, then write down what you personally feel using a whole lot of shitty adjectives that really don’t help anybody in understanding what the fuck’s going on… oh, and then put some imaginary normative framework on it so you still look like you know what you’re doing. Stars or K’s or metal horns preferred: numbers suck ‘cause they can’t help you decide whether you should buy that shit or not. Stop laughing, I know you downloaded it already.

What am I blabbering on about? I hear ya. Snailking’s latest album, Storm, made me question quite a few of the things above. You see, this band arms itself with the Neurosis/Isis sound.. well, I’m not quite sure if Snailking tune down the lowest string to achieve that grainy low-high contrast like those bands do. What I do know is that the love of Yob and Neurosis and a few other bands seems to be the place where the tonal pallet (mainly Neurosis/Yob) and rhythmic pallet (Yob, albeit less fluid and more pounding) hail from. Now I’ll tell you straight up: I’m not a fan of that sound. I know my Neurosis albums, I like Yob’s Elaborations Of Carbon as much as the next guy, I have even seen Yob perform countless times (thank you, Roadburn and assorted rock and metal gigs!) and I like to believe I quite understand why these bands have earned so much merit in our musical world. But shit, as I told you, I’m just not totally into that ever-flowing 6/8 rhythm with those grainy, half-low, half-discordant-treble chords on top! Snailking’s pallet doesn’t suit my canvas! This presents problems to a reviewer. I’ll have to peer around, try to divine what’s happening in the record whilst bypassing my personal feel. Now you know why I started blabbering incoherently in the introduction. Now you will understand why I shall ask your a priori forgiveness for missing the diamond you saw glimmering in Snailking’s new musical cave. Storm is quite a piece of work.

As I said: Yob, Neurosis, discordant treble chords with low doom punches, rolling rhythms, an interlude here and then, a solo to send you flying. And, refreshing: tape hiss! The auditory smell of unclean production! Storm has a thick, raw yet open sound. Snailking, hailing from Sweden and meeting during weekends after driving 200+ miles to get to the rehearsal space, spent a lot of time and effort to achieve this amount of sheer Unclean Crunch. They also spent about a year and a half writing the album, among which were certain very heavy months for guitarist and vocalist Pontus Ottosson. Lo and behold: both the time and stress involved are noticeable on the record, which is quite a feat. As we noted before, ‘tis one thing to feel, ‘tis another to evoke. Ottosson’s vocals manage to convey an atmosphere of abject desperation, reminiscent of some of the great hardcore punk records – even while he’s not the most intense, front-mixed or vocally able singer around.

The five songs, mostly a balance of flowing discordant riffs, DOOM sections and some quiet interludes, are written well and while they generally follow the Yob structures and other regular doom paths they have a few extra qualities that distinguish Storm from the doom crowd. One of these is an increase in intensity. Let me explain. Snailking repeat entire sections instead of just riffs and then rearrange ‘em for effect, but the thing is, Snailking makes sure to increase the power of the sections over time. The second time a part of a song rolls by, it’s heavier than the one before. This is quite gratifying, and probably a result of the amount of time the band took to finalize all the details. The amount of time spent writing is probably also the reason for the fact the interludes sound so well timed (check out Premonitions hypnotic build-up to discordant riff heaven) and the fact that most sections run for precisely as long as the attention would hold. Take note, kids! Another distinguishing feature of Storm is the dynamic playing of the band – they sound as if they’re rocking out and jamming instead of using a metronome. Ottosson especially is adept at landing his guitar strokes just behind the beat to achieve a heavier rolling punch, as Slithering’s doomier sections clearly show.

The songs? I’m sorry, they’re too much like each other for me to go do them separately. You wanna know why? ‘Cause I don’t like this sound and I can be arrogant, that’s why.. but also because this album is meant to be taken in as a whole. I did, and I know that worked a whole lot better than trying to distinguish every song in words. Ah, fuck it: To Wonder is the intro and pure Swedish Yob distillery, Premonitions is the build-up-to-riff-heaven song, Slithering is the evolving groove song, Requiem is of course the SLOW DOOM song and Void just wants to funeral march off the stage to finish the album and reach its eponymous ending.

See that didn’t go so bad now did it? Well, actually, it did. I still don’t like the record. Sorry! SORRY! I don’t think Snailking should stop, I’m just not gonna buy their records. To me, Storm is one big Swedish Yob ripoff, so reminiscent of that band that my visiting friends were fooled, and it may sound more raw and more emotionally charged (‘earthy and abject desperation’ I would say, instead of Yob’s ecstatic Doom-Yogi experience) but it won’t convince me anytime soon. Just so with the distinguishing features of this album. I need more than details and trickery, I shall need something new.. something.. more than all these.. slow rolling grooves.. and.. discordant chords… Is this a problem? Nah. As I said.. you shall have to forgive me for missing the diamond you saw glimmering in Snailking’s new musical cave. I have tried to help you on your way, and I have tried to do justice to the extraordinary amount of work this band has put into making this album. I sincerely hope for my sake that I will either get it, like all the other reviewers seem to, or forget it so I can get back to being a little opinionated prick with a keyboard. But most of all I hope Snailking shall dig even deeper into the riffs and make a more unique album next time. Lord knows they deserve all good stuff that’s coming to them.