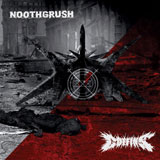 I’ll just go right on ahead and state the goddamn obvious up front: That’s right, legendary San Jose DIY sludge behemoths Noothgrush are well and truly back! Not only that, but they’re wielding their first bout of brand new material since their 2011 awakening from a self-imposed 10-year musical hibernation. In their typical discological fashion, it’s a split release with three original tracks of smouldering, desolation-derived misery followed up with a further two rounds of abyss from none other than Tokyo’s new darlings of planet-devouring death-doom, Coffins. If Southern Lord’s recent output of hardcore and crust-based releases has left you thirsty for the slow and the hard, then this split is ready and waiting to come at you like a waterfall of sweet, sticky and succulent sludge. There’s a hint of masters and apprentices here, with Noothgrush pummelling through an aching 18 minutes of experienced, precise and intolerably remorseless grime, before Coffins explode into their strained, mid-paced chugging gore. Whichever way you look at it, it’s a sick and twisted way to spend a half hour and it’s gloriously good.

Noothgrush punch first with ‘Humandemic’, an icy and heartlessly mechanical opening number which stutters through samples of what sounds like pain-suffering cattle before submerging itself in Russ Kent’s thick, solemn riffing. Dino Sommese (ex-Dystopia and Ghoul) is now permanently installed at the band’s helm and his bellows, squeals and harrowing bawls have become as much an essential fixture of the band’s sound as Chiyo Nukaga’s incessant and barbaric drumming. Kent picks and shuffles morbidly across his fretboard as Nukaga and Sommese stomp on skulls, empty shotgun cartridges and humanity’s hopes and dreams to a hollow, quaking conclusion.

‘Jundland Wastes’ is up next, a song which has been around in one form or another since the classic ‘Erode the Person’ re-issue in 1999 and appeared in rough form on Noothgrush’s ‘Live For Nothing’ live release. If there’s ever a song that sounded like a drenched, windy wasteland of nothingness, this is it. Mainman Gary Niederhoff’s brooding basslines thrust forward then drop downwards as Sommese’s howl reaches new depths of darkness with Nukaga executing round after round of punishing aural GBH behind them.

The nine-minute crawl that is ‘Thoth’ however is the money-shot that we’ve all been waiting for. Eerie, psychotically-driven preaching rings out and reverberates through the speakers before Kent and Niederhoff bludgeon the senses with their sluggish, yet savage string-work for nine crushing minutes. Nukaga is still the key-stone however and her destruction behind the kit begins to sound less like a human being playing the drums and more like a small fleet of planes flying into a concrete wall with every cymbal crash. It’s a punishing and soul-bruising piece, but yet as many doom bands as there are in this world, it’s still the legends that hit hardest and truest and with ‘Thoth’ Noothgrush prove they really are a Grade-A in wretchedness.

As if that wasn’t brutal enough, Coffins then arrive to promptly drop the treble and crank up the bass to hate-splitting levels. ‘Drown In Revelation’ both hangs on the cusp of what sludge can really be as a genre, whilst equally paws eternally at the gates of death metal. Put simply, if you left Entombed, Dissection, EyeHateGod and Mayhem to ferment for 26 years then let them loose into a shed full of power tools, you’d get a Coffins track. Ryo Yamada, in his last stand as the band’s lead singer, delivers a masterclass in guttural yearning and almost animalistic vocal vitality. Bungo Uchino powers through the same riff for the best part of six minutes, mangling, warping and slicing it ever thinner and leaner atop Satoshi Hikida’s swaggering drum patterns.

If ‘Drown In Revelation’ shows the band at their most indestructible, then closer ‘The Wretched Path’ sees the band loosen up a little and, dare I say it, indulge in a little fun. The riffs get slicker and break into a gallop as Takuya Koreeda’s cacophony of a bass-tone reclines a little into a mosh-inducing groove. Halfway through, the song opens out into a stomp reminiscent of an Acid Witch track or even Celtic Frost after a heavy night out gargling extra razor blades. It’s a welcome seclusion into the boogie-doom however and with just under a minute left, Coffins return to the central riff to shut up shop for good on this pile-driving release.

If there was ever a notion that vinyl can arrive heavier than 180grams, this is it. It’s a “welcome back” to Noothgrush and an “as you were” to Coffins from me – sludge has never been in safer hands.