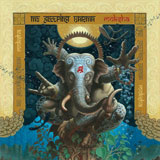 The psychedelic stoner band from Aschaffenburg is back with another album. My Sleeping Karma has been quiet for 3 years, since the release of Soma, but now they are back with a record that is infused with meditative sounds and an aura of spirituality. Moksha is a dreamy, meditative materpiece, but what else would it be?

The four Germans are masters at creating instrumental miracles. The title of this new record means the same as nirvana in the Buddhist, Hindu and Jainism tradition. It implies a liberating from the cycle of life and death, liberation from samsara. That seems to fit in with the tranquil feel of My Sleeping Karma’s music.

Prithvi means ‘the vast one’ and refers to Earth. The first song is titled this way and offers steady, vast flowing riffs. Lingering heavily in the air, creating a repetitive pattern with some airy effects wavering high up in the air along. The sound is very clean, also on the interludes the album is filled with. The calm, tricking sound of the guitar stays on a similar level, creating a hypnotic state, also on the next track. Vayu means ‘The Purifier’ and is a significant deity. Clearly this version is rather calm in fact. Slowly meandering through the still atmosphere of the song, the bass comes up. The song picks up halfway and seems to swell up. The clatter of the drums is the most expressive element in there, breaking the peace. In a way the band sounds more and more like post-rock acts Explosions In The Sky and Mono it seems.

Akasha means aether in Sanskrit and this is truly an ethereal track. Light, gentle riffs with a twangy after effect are accompanied by drops of eerie sounds, while the music rolls on every softly. Towards the end the track intensifies with some rolling drums and peaking guitars. After that another intermission starts. The album has interludes between all songs, every time offering a different theme. This one starts up the ever gently sounding title track. Some keys and tremolo guitar picking the atmosphere, giving an oriental feeling to the already convincing track. After almost three minutes, a ripping riff with some Rush like effect cuts through the calm, but does not show any sharp edges. After that, the song truly comes loose with intrinsic guitar work over a solid flood of bass. Then slowly the tones descend into the same calm pattern as before.

The song Jalam then starts, offering a dulled sound, seemingly obscuring itself slightly while slow reverberating to create a full sound. These guitar tones slowly create a web of hypnotizing patterns, lulling the listener into a calm. Some guitar picking pierces that cloudy sound towards the end. Luckily, final track Agni offers some heaviness as a closer. Swirling, heavy riffs pulsate. This album offers nothing but clever, atmospheric and hypnotic music by this band. It is for those with a love for eastern atmosphere, but also with both feet on the ground. A record to enjoy slowly. 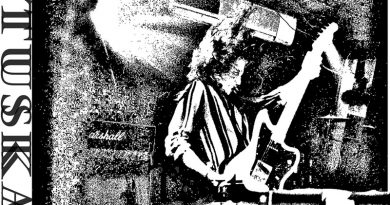