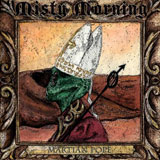 Ok quiz time, how many Italian rock bands can you name? Paul Chain, Death SS, Rawpower, Negazione, Ufomammut, El Thule, Lacuna Coil, Bulldozer (!!!??). Starting to run out of options? Yeah me too. It seems though that there is a real scene out there bubbling under the surface with sites such as www.perkele.it propping things up and a little Myspace digging will yield some impressive results.

Misty Morning are one such band I came across in my meandering route through Myspace and I’m damn glad I did. If you want doom you’ve got it!!!

This 5 track release wears its influences firmly on its blackened sleeve chasing the big hitters of all things gloomy such as Sabbath, Cathedral and St Vitus. In fact, if I’m not much mistaken the name comes from the first line of Sabbath’s “The Wizard” (bet they didn’t think anyone would notice!!!).

“Martian Pope” kicks things off here…it’s more like an intro masquerading as a song being about 30 seconds of a beautifully loping chugalong riff which kicks into “Doom Saloon”. The title alone evokes images of a filthy shack somewhere populated entirely by clones of Wino and Dave Chandler, chugging back beers with whiskey chasers while listening to Black Sabbath!!! That wouldn’t be far wrong to be honest, this track is pretty dirty keeping the pace a few steps above crawling on the ground with a killer stop-start riff. Vocally beardy wierdy frontman/guitarist Luca draws heavily on Lee Dorrian, Tom Warrior and Wino with an impressive roar.

“No Mood (Necromancer’s Ride)” creeps in with an abstract and atmospheric intro before belting in with a prime slice of doom boogie. Final track “Astrosarcophagus” drags us back into doom territory with more fat-assed guitar and a vocal that is literally possessed by the spirit of Lee Dorrian!!!

These five tracks were recorded and mixed in two days which is no mean feat. As a result the production does have a live feel but is still thick enough and atmospheric enough to satisfy. Given two weeks and a little more time to spend on the finer details in a decent studio with a decent engineer I’m pretty confident these guys could produce a doom classic.

Misty Morning may not be doing anything groundbreaking and original here, the spectre of Cathedral does hang in the air around the band like a pall of blue smoke (check out the “tribute” in “Astrosarcophagus”!!!), but these guys do have two big things in their favour; immense riffs and huge songs. Two spins of this demo sees the music lodging itself in your head like a piece of shrapnel and that should, if there is any justice in the world, see these guys rise above the pack and become contenders in time. Do yourselves a big favour and have a listen. 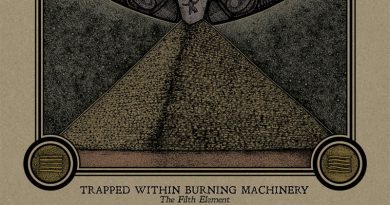