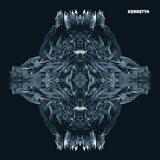 It seems that everywhere you go these days you trip over another instrumental ‘post-rock’ band, all ‘quiet-LOUD-quiet’ dynamics and brooding echo-laden chords. They’re virtually lying around in the streets like mumbly/shouty old tramps.

Kerretta, however, are emphatically NOT one of these Godspeed Your Explosions In The Mogwai clones. No sir, these three New Zealand boys can rock it up with the best of ’em whilst still retaining subtlety AND a sense of individuality. In fact, at not one point during ‘Vilayer’ did I roll my eyes or check my watch – I was genuinely riveted.

Kerretta aren’t one of your meandering namby-pamby show-off bands either, I can honestly say that the vast majority of the eight tracks on ‘Vilayer’ are fully-functional SONGS – they have a POINT to them. Across the length of the LP I am most often reminded of Cave-In, circa ‘Jupiter’ and ‘Antenna’, and of recent Russian Circles material – particularly with regard to the prominence and sinuousness of the excellently-played bass guitar. Not too shabby as far as a vague comparison goes, I think, but also throw in a hefty dose of the prime drum THWACK of Shellac, and an infinitely more compact version of the dynamics of Tool and THEN we’re really cookin’.

Personal standouts include the driving opener ‘Sleepers’, with its angular Shellac-y riffing and Whammy-pedal squeaks, the dramatic tension and ghostly-to COLLOSSAL riff of ‘The Secret Is Momentum’, the killer prog-groove of ‘The Square Outside’, the odd backwards-sounding rhythm and monstrous guitar pile-up of ‘Nest Of Spies’ and the stuttering enormity of closing epic ‘Bone Amber Reions’, moving as it does from huge cut-up helicoptering guitar chords, to shimmering mirage, into bulldozing bass and psychedelic scree. Hell, that’s just about the entire album named as a highlight!

I’ve found myself listening to this quite a lot since receiving it, and enjoying it every time – which is a refreshing change, since I’ve found most instrumental ‘post-rock’ records for the last few years to be either a total snooze-a-rama from the get-go, or the novelty soon wears off. Its always good to have your preconceptions challenged, and it’s even better to have your ears rocked off the sides of your head. Kerretta managed BOTH with aplomb.

If you enjoyed Russian Circles excellent ‘Geneva’ record and any of the mid-period Cave-In material such as ‘Jupiter’, you won’t be doing yourself a disservice by giving ‘Vilayer’ a spin. Reward your poor ears.