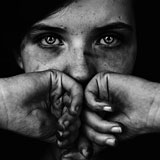 King Crimson guitarist Robert Fripp once described attempting to play atop his early ’70’s rhythm section, John Wetton and Bill Bruford, as akin to “playing with a flying brick wall”, and advised any player coming into contact with it to “go with it or duck!”. Ever the forward-thinking musician, Fripp could well have been talking about Celeste, a band with the uncanny ability to fly at the listener like a granite edifice, albeit one bristling with spikes.

A full-on assault, with nary a let-up in its unrelenting fury, ‘Morte(s) Nee(s)’ is sonically the bastard offspring of ‘modern’ Black Metal – think later Emperor as opposed to dirty ol’ Dark Throne – and filthy European hardcore – think Systral, Carol and Knut – with a pinch of DNA from Botch , circa ‘We Are The Romans’ and Meshuggah, circa ‘Chaosphere’. Now, don’t get me wrong, Celeste have none of the ‘mathiness’ of Botch and Meshuggah, but they do share a similar trait for erecting a deafening wall of hi-freq guitar-scree with a muscular bass undertow and blistering drummage, as used most effectively on ‘Frequency Ass Bandit’ and ‘New Millennium Cyanide Christ’ respectively.

The first four tracks on ‘Morte(s) Nee(s)’ literally fly past in a wall of pummelling drums, glutinous bass, screeching ‘one-guitar-as-an-orchestra’-isms and screaming phlegmy invective, like ‘BANG-BANG-BANG-BANG’ for near twenty minutes. I tells ya, if you can get past that, its’s plain sailing from then on out. It really is hard to believe that Celeste only have one guitarist, since there is enough raw noise here to sound like a veritable and relentless guitarmy.

Now, my French is dubious at best – I can order food, make sexy chit-chat and get arrested but that’s about it – so I have very little idea what the song titles herein mean, since all seven tracks, with the exception of one – instrumental track ‘(S)’ – have cumbersome and lengthy French names. For example, track one is ‘Ces Belles De Reve Aux Verres Embues’, and track six is ‘Un Miroir Pur Qui Te Rend Miserable’. Without the aid of an online translation program, I feel confident in saying that whatever they translate into English as, Celeste are NOT happy bunnies. In fact, if it’s at all possible to brood at breakneck speed, then THAT is what Celeste are doing.

As I mentioned earlier, the storm-clouds clear briefly on the fourth track, the also afore-mentioned ‘(S)’, which is an ominous instrumental number, composed of cavernous bass notes, pounding drums and piercingly hissing guitar discord overlaid with the sounds of distress and suffering. Not MUCH of a respite, but it does give the listener a momentary breather before being sucked back into the jagged maelstrom of ‘Un Miroir Pur Qui Te Rend Miserable’ and final nail in the coffin, ‘De Sorte Que Plus Jamais Un Instant Ne Soit Magique’, which starts out at the usual clip before dragging itself down into the mire of its own disharmony, and crawling like a wounded filthy bass-driven beast being dragged down to the muck by some hovering airborne predator. Over this hypnotic dirge the sound of violins and viola begin to creep in, eerily at first, but slowly being joined by a triumphant guitar and resolving into something vast and powerful – strings resonating like an air-raid siren, guitar ascending to meet it and all the while that enormous bass shudders along – and then……….nothing.

Celeste, with ‘Morte(s) Nee(s)’ give us less of a gallic shrug and more of a gallic ritual suicide.