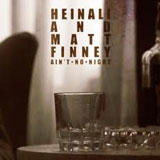 Taking the raw material of their previous work – the intimate, spoken vocals, the clouds of roiling guitar murk and the wide-angle cinematic scope of the sound palette – Heinali and Finney have fashioned something at once more intimate and vaster in scale than that which came before.

Rising from an ebbing sea of vinyl hiss, crackle and static, the voice of Matt Finney ushers opening track ‘In All Directions’ in with hushed and subdued tones. Lonely piano and deep, tolling sub-bass ring out from beneath the waves of static and a hi-hat plays out into the gaping void left by their dissipation before that void is filled by a billowing fog of smeared guitar skree, cracking snare,  murky washes of synth and occasional piano. The sound is vast and mournful. Billowing across the audio horizon, only to gradually fade into the distant sound of the sea and circling, calling seabirds.

‘Tinderbox’ begins with a loop of guitar like the angry buzzing thrum of a hive of bees, submarine bass punches and the hard thwack and crack of bass drum and snare. Twisting skeins of pitching synth thread through the roiling fug, like chemtrails in a clouded sky, until ominous piano ushers in Finney’s gravely hushed voice and everything else dies down. Bass thrum, snare and bass drum take over, carrying the rolling, drifting rhythm along beneath the scattered notes of piano. Ringing, smeared fuzz guitar fills the air before dying out, leaving a single keening guitar line, echoing piano and finally a chopped static hiss hanging in the ether.

The title track, ‘Ain’t No Night’ itself, is a colossal brooding swagger, alternating between a throbbing, sensual grind of deep bass, minimalist drumming and echoing delayed slide guitar and Finney’s intimate, confiding voice over brittle unadorned blues guitar licks and dead air. The relentless rolling, swaying rhythm brings to mind a particular scene in David Lynch’s ‘Twin Peaks: Fire Walk With Me’ in which the soon-to-be-murdered Laura Palmer dances with a stranger in a narcotic haze in the backroom of a sleazy roadhouse juke-joint. A combination of bleary trance and seedy sensuality.

Final track ‘Hallelujah’ takes a more subdued, downbeat approach, with piano, sub-bass and Finney’s whisper taking the lead, drums and echoing, ethereal guitar only entering during the latter half, once Finney has said his piece. The sense of intimate sadness is palpable.

The crack of a snare signals the end.