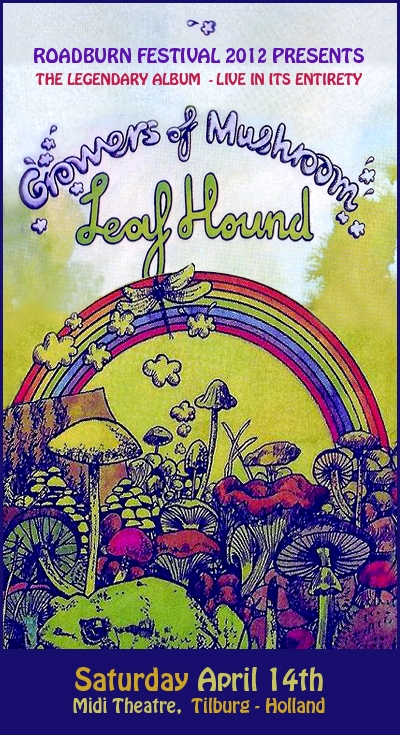 British proto-stoner rockers Leaf Hound will be making a triumphant and highly anticipated return to Roadburn for the 2012 festival. Led by original vocalist Pete French, Leaf Hound gets a chance to reprise their extraordinary 2006 Roadburn performance, this time playing their seminal Growers of Mushroom LP in its entirety on Saturday, 14 April.

One of the legendary heavy 70′s acts from England, and cited as a major influence by many current bands, Leaf Hound are still a powerful live band with their devastating show at Roadburn 2006 providing ample proof of their skills. They went on to release their Unleashed album in 2007 and have been celebrating their 40th anniversary in 2011. 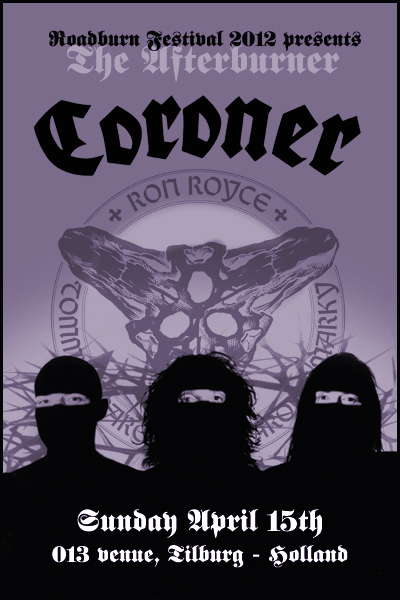 Roadburn are also extremely excited to announce that Coroner will be bringing their amazingly tight brand of technical thrash metal to the 2012 Afterburner, set for Sunday, April 15th at the 013 venue in Tilburg, Holland.

Swiss legends Coroner picked up the thrash metal mantle in 1987 when Metallica went in a more pop direction and Megadeth began to succumb to their vices. They advanced the genre through amazing musicianship and by adding complex progressive / jazz musical elements like odd time changes and unusual modes, but always stayed true to the metal.

So advanced were the musical concepts that Coroner brought into their world of thrash metal, that their five records not only stand the test of time, but they transcend and expand the boundaries of the genre. Listening to them today is just as exhilarating and relevant as they were 20 years ago.

Not too bad for three guys that started out as the road crew for Celtic Frost, a band that got so good that they eventually had Tom G. Warrior do vocals on their Death Cult demo in 1986. By the time they switched to Ron Royce (bassist) handling the vocals, they were ready to unleash their first full-length R.I.P. onto the eagerly awaiting metal world. They followed that up with the classics Punishment for Decadence, No More Color, Mental Vortex and finally Grin.Their sound evolved as they went along, eventually (on Grin) approaching Industrial metal territory, and they helped prolong the relevance of thrash metal in a world quickly turning its attention to grunge, grindcore, Swedish death metal and black metal. Coroner pushed the musical boundaries and kept their sound fresh and evolving, always displaying their amazing technical abilities and their memorable songwriting.

There is no doubt at all that Coroner will bring supreme metal chops as well as arsenal of amazing songs to their Roadburn show. For those that never got to to see them, this will be an education. For those that did, this should bring near-delirious anticipation of hearing some amazing metal.

Roadburn 2014 In Collaboration With Cortonville Introduces: Dario Mars And The Guillotines