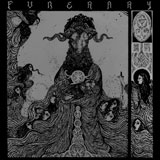 Funerary are still relatively unknown, but that doesn’t mean they aren’t talented. In fact, the underground has always been a place full of exciting talents a lot of people aren’t aware of. Thanks to the Internet, its now easier to discover and explore them. Unlike in the past, we are not limited to magazines (and fanzines), radio or TV shows – we have access to almost everything. So, what can we say about Funerary?

Formed in early 2013 and hailing from Phoenix, Arizona, they are an atmospheric funeral doom band .Their sound is extremely melancholic – the perfect soundtrack to those bad days where everything goes wrong and you become hopeless; those days when you find yourself swimming in the ocean of sadness and sinking into an abyss of despair; the days where you struggle to cope with life.

Sure, you can always listen to something happy that will cheer you up, but you can also choose this record and this band, and confront your inner demons. Just close your eyes and enjoy this eerie journey into the scary, almost schizophrenic world of Funerary.  The visions won’t be pretty, but the listening experience will be absolutely surreal.

Personally, I pictured in my mind a world dominated by evil, where people live in pain and are stuck in an endless circle of depression.  Just listen to Beneath The Black Veil and you will see what I mean. The vocals sound as if they were recorded by a beast living in the depths of hell, while the guitars are heavy, creating a scary atmosphere that can be heard throughout the album.

All five tracks are amazing in their own way: on Coerced Creation the guitars create this overwhelming wall of sound and the vocals are creepy – almost like the lament of a mental patient locked in a dark room of a psychiatric hospital. Untitled features feedback and deep growls, while the title track is much more experimental and cosmic.

Depressor is one of the heaviest tracks, although there’s some melody halfway in the song so we can all recover from the beating. And the ending… my God, what a chaotic mess – an improvisational touch to a brutal sonic assault – one that leaves you emotionally drained.  This is definitely not an easy album to listen to, but it is awesome! These guys are a force to be reckoned with:  the music is aggressive, demonic and gloomy, but there’s experimentation, there’s melody and, well, there’s variety, resulting in an intense and unpredictable trip.

Funerary have the ability to come up with mysterious and dark ambiences, presenting the listener with the harsh reality of a post-apocalyptic world. On the other hand, listening to these songs is an extremely cathartic experience: once you’re done releasing your negative emotions, you feel tired but relieved. More than just music, this has a ritualistic vibe!

Now, not everything is perfect – one can argue what they do is a bit similar to bands like Wolvserpent, but they still rock… they fucking kick ass and they are a band every fan of extreme music should check out. Help spread the word, people!  Go get it and be afraid… very afraid!