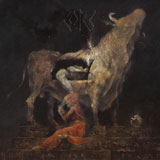 As the more history obsessed readers will know, a siege was a gruesome affair for the inhabitants of a castle. It meant hunger, disease, fear and a lot of very twitchy and wired guys in a small room. A bit like the current day festival experience some of you may be familiar with, where alcohol is the only comfort. All in all, it’s a grim affair.

So with that grim vision in mind, there are plenty of promises when the band Castle released a new album titled ‘Under Siege’. The San Francisco heavy metal band lives up to that expectation. For their third album, the band signed to Ván Records, which we know from The Devil’s Blood of the late Selim Lemouchi. Though the bands are not directly linked, there’s definitely a feeling of similarity when you listen to opener ‘Distant Attack‘. The swirling sound of the band in a heavy hitting assault of psychedelic riffs combined with the vocals of Liz Blackwell hint at the Dutch act. Even the vocals of Blackwell have the same raw and pure power as those of Farida Lemouchi.

The sound of Castle however, is more confined to, restrained if you will, to the range of their vocalist. There’s no wild, soaring guitarwork happening. The sound is steady but powerful, like the perfect pump up tune for Conan riding into battle. A song like ‘Be My Ghost‘ does have an air of mystique around it however. So does the morbid ‘A Killing Place‘, which gives the listeners the same chills as when one is on such a location. Solo guitar play spices up the sound here, never sounding too overdone. There’s also something to the sound of Castle that makes it seem simple, back to basics, the band needs no bells and ribbons to achieve any effects. The nursery rhyme-like singing of Blackwell on ‘Pyramid Lake‘ does enough to evoke occult images of dead and doom.

The rhythm is the strength of ‘Powersigns‘. Not only does it propel the song forwards, making it sound energetic as much as it is unnerving, it also places the music of Castle with one foot in modern times. The sound is the groundwork we hear in most modern metal bands. That doesn’t take away much of the natural quality the band demonstrates in ghostly tunes like ‘Labyrinth Of Death‘, with another main role for Blackwell. The soaring guitar parts give for some breathing space and leave room for the rest of the band to step to the front for a moment. The peculiarity of the sound this band displays is how unedited it sounds, it feels as if recorded straight to tape without anyone fidgeting about. That very pure feeling is tangible in the slow paced intro of ‘Temple Of The Lost‘. No layers of distortion piling up, just the sound of the instruments doing the work.

Noteworthy too is that the artwork is done by Denis Forkas Kostromitin, known for his work with Behemoth. It only adds to the slightly sinister feeling the band evokes. That is what they do one more time on ‘Evil Ways‘, with a barrage of guitar sound, creating a sonic swirling haunting in the besieged castle. Maddening and dark, but so tight and enthralling. This band has made a fine piece of music indeed without ever trying to do too much or too hard.