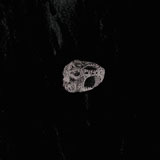 Dry Cough Records, De Graanrepubliek Records, Box Records, Viral Age Records and Tartarus have all come together to make this release possible, which should give you some indication of how special it is. This is the Nottingham-based duo’s first full length record, with their back catalogue consisting of The Eternal Marshes EP, a split with Undersmile and a live album. Unavailing sits at just under an hour with four tracks worth of meditative, monolithic, eerily beautiful music that’s crushing enough to result in tinnitus even at a low volume. The best way to describe Bismuth would be to imagine Sunn O))) playing their own interpretations of Jucifer songs, and even that doesn’t really do this record the justice it deserves.

A sonic mountain of drone and distortion is created by Tanya’s bass, while her voice meanders between an ominously low banshee’s shriek, that will set cold fingers creeping along your spine, and a haunting, cleanly sung, almost siren-like call that will lull you into a state of pure hypnosis. Joe’s drumming acts as the metronome for every song, creating a slow and steady tidal wave of percussion that sits just below the reverb and guides the songs through feedback drenched highs and intense lows.

There is a masterful skill at play here between the pairing, using just a rhythm section and total amp worship to create heady and cloying atmospheres that invoke startling unease followed by intoxicating entrancement. In a genre where stoner riffs and Electric Wizard rip-offs are a dime a dozen, to hear something that’s so measured, so deliberate and yet so punishingly extreme is a breath of fresh air.

The bass, as an instrument, isn’t given enough credit and bass players are often pushed to the background and even made fun of – for bands where this is the case, the bassist clearly isn’t doing their job properly. Tanya plays bass as it’s supposed to be played and there’s never a point on Unavailing where a guitar is missed or even sounds necessarily. Similarly, with Joe’s drumming, there is no need to get carried away with the beat and allow a galloping pace to take over – there is more skill in self-control and being able to maintain a steady beat that sets the pace of the songs.

This is the perfect record for those that worship at the altar of “tune low, play slow” but also a prime example of the mantra “less is more” – fine proof of what can be achieved without the aid of guitars, synths or samples. Worth multiple listens if you’re a fan of Sunn O))), OM and/or Burning Witch.