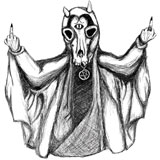 Barbecue, booze and a no bullshit attitude forms this American trio out of Brooklyn, NY and they deliver a dirty hard smack in the mouth and the taste of your own blood enlightens a fire deep inside of your doomed soul. With heavy psychedelic metal, a rumbling wall of doom that isn’t polished or refined in any way makes the listener feel like they’re in a dark, warm, smoky sweaty club that reeks of old stale beer and vomit. Moist dripping from the ceiling and flowing down the filthy walls. You can feel yourself standing there in the crowd with eyes closed and banging your head slowly back and forth to the rhythm of the loud music that makes powerful vibrations you also feel in your entire body. Not just an experience for your ears but your whole body.

Blackout is quite a fitting name for this trio as they refer to their name as blacking out from too much alcohol consumption and I bet that’s not an uncommon occurrence amongst the people in the audience when Blackout is playing live. I get a bit drunk just listening to their album. Six songs strong and surely to give you what you yearn for when it comes to filthy heaviness. There is no mercy given from the opening track till the bitter end.

Blackout was created when Christian Gordy, a one legged bartending artist and barbecue enthusiast and Taryn Waldman, a former Hooter’s waitress who fittingly met at a 4th of July cookout in Brooklyn back in 2011. They were later joined by the third member Justin Sherell and the lineup was complete.

If you take a look at the amazing band photo you can actually see with your own eyes what you will come to hear before even turning their album on. Your eyes wont deceive you I can promise you that much, what you see is what you’ll get and lots of it too. The gritty and sludge driven doom with its psyched out blanket wrapped around it will turn your brain into a drunken hazy mush of grey matter but in a very good way. The unpolished sound is fitting and there’s no noise cancelling or other filters and tweaks cleaning up the sound on ‘We Are Here’. Just plug your instruments in and turn the amps up as high as you can and start playing riffs that are crushing in slowness and beat the drums like there’s no tomorrow.

Creaking chairs & other background noises that may occur when recording an album are just left in, hence the live gig touch to it all. Vacation Island studio is where this piece was recorded with engineer and producer Rob Laakso (Diamond Nights, Swirlies, Kurt Vile).

The vocals command you to do all sorts of horrible things or just tells you to fuck off, at least in my mind they do. They’re dreamy, chanting and angry all at the same time and puts even another layer to the outcome of ‘We Are Here’.

So put your hands up and make the sign you’re all so familiar with, no not the one with two fingers but the sign with just one, the middle finger!