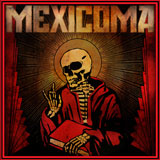 The Swedish stoners have been around the busy Umea scene for quite a few years now, but it has taken until Mexicoma now to bring out their first album proper. Offering quite a minimal sound but still cutting loose occasionally, the band spend each of the tracks building up slowly from a chilled out start, to much bigger sounding choruses.

The six piece (including guitarists Olle Sjolund, Peter Norstedt & Nicklas Vilberg) have developed an easy going sound, which is driven along by the rhythm section of bassist Charlie Dahl and Oskar Melander on drums. This duo lay the foundations for the loose grooves of the three guitarists and allows them to build on and gradually layer the songs together as they progress. At times, vocalist Magnus Olsson sounds a bit like Neil Fallon, and that style fits perfectly with the noisy but restrained tracks on offer here.

From the first track ‘5.27’ through to the closer (an excellent version of the gospel / blues standard ‘John The Revelator’), the band offer several tracks which generally follow the same pattern without being repetitive. ‘Truth Been Told’ offers something slightly different, setting off at full tilt compared to the rest of the album. The seven tracks spread out over 40 minutes, so each is given enough time to grow and evolve. A really good release, one that after a couple of listens will become engraved in your mind and seem like you have known the songs for years.

With a couple of releases behind them now, the band have shown there is plenty of potential here, and hopefully, if the future can bring more like this, they could be a real force within the stoner scene.