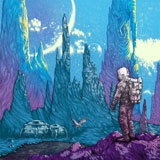 Yuri Gagarin, according to all non-Biblical, non-religious sources, was the first human to enter space. He died in 1968. Now if you take 1968 as a year in music, you have iconic releases by Silver Apples & The Velvet Underground, two releases apiece by Blue Cheer & Iron Butterfly, the first Quicksilver Messenger Service record… but most importantly (to this review at least), Krautrock and Space Rock bands were beginning to form and record. Fitting, then, that the year of Gagarin’s passing marked the year music was taking its first tentative steps into the Cosmos.

Yuri Gagarin the band is a ‘heavy space rock’ collective from Gothenburg (didn’t a couple of death metal bands come from there?) ‘Heavy space rock’ could, realistically, be anything. They could sound like Hawkwind, or sound like Faust. Both are equally ‘heavy’ bands that explore Space in both sound and performance, but are vastly different in terms of their actual music. ‘First Orbit’, the first track on Yuri Gagarin’s self-titled release, is more on the former side of the fence. Their blend of space rock is a squalling, spiralling mess of sonic colours designed to push the listener “Furthur”.

‘First Orbit’ is a heavy duty cut, coming in at just over nine minutes & it writhes and pulses, epic swathes of guitar sound crashing against each other. I dig it. It’s one of those tunes that you just put on and lie back, letting the groove get up and atcha, or a tune that you nod your woolly brain to after the last toke of the night. Heavy. There’s some piercing guitar work cutting through the fug of your mind, and when it really kicks off after 8 or so minutes, I’m well and truly stuck in the sounds. The guitar is exemplary, explorative without losing sight of the groove riding on underneath. It’s a great cut to open with.

There’s a sinister edge to ‘Sonic Invasion 2910,’ the guitar phases a little heavier around the speakers, there’s a labyrinth of feedback and hiss humming around the drums that drives the whole thing. The vibes Yuri Gagarin are pumping out live up to both the ‘heavy’ and ‘spacerock’ tags equally, this couldn’t be mistaken for anything else. On ‘Sonic Invasion…’ they seem to let go of all the restraint that they placed on the first track, and really let the sound open up, going to Doctor Who levels of theremin-howl sci-fi nuttiness, like a Dalek on acid. Some more top-class guitar squalls push the track to unholy levels of Space erotica, just listen around the 5:35 mark onwards to see what I mean (if you’re an impatient git.)

‘Za Kosmosom’ (me neither) opens with an Al Cisneros-like Eastern melody (yes, I know he plays bass and this melody is on guitar, but dig this track next to some of his work in Om to get the flavour.) It’s a red-eyed journey through a mystical souk in the future or some such hallucinogen-fuelled-fantasy. It’s a spicy cosmic stew, and by the time that lovely lead guitar starts spurting psychedelia all over the shop, you’re completely locked into the dry-mouthed galaxy worship they’re peddling. It’s another prime slice of space cake.

From what I can gather, Yuri Gagarin attempt to split the very time-space continuum we find ourselves a part of with ‘The Big Rip’. And boy is it a big ‘un. The track has the longest run time of the record, just shy of 11 minutes, and it’s a fitting final act for the grand cosmic adventure you’ve found yourself taking for the previous half an hour. It’s the best track on the record, though all of them are stellar. There’s the ghost of Detroit lingering beneath the layers of space gloop – a driving, leather and grease rhythm that carries the weight of the hefty run-time on its sweaty shoulders. The guitar fireworks take up the whole middle movement of the song, and they never get any less than top marks. The music pushes on and on until it explodes into what sounds like the death of cyberspace. Highly recommended.

Basically, I loved it. It’s a quality release, crafted by people that obviously know the right buttons to press to make people float down the stream of their own consciousness, abandoning their ego while flying through the electric field of matter and time and onwards towards the Great Truth. It’s a groove-fest made by stoners for stoners, and has a kickass cover you could lose yourself in. Now can you dig that my psychedelic brothers and sisters? 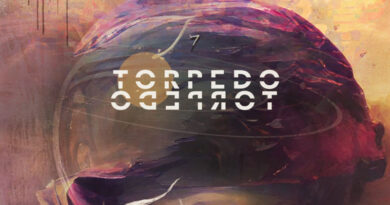