The dictionary definition of ‘wallowing’ that does not imply a hippo at a watering hole is the unrestrained indulgence of something pleasurable. Then of course, there is the notion of wallowing in misery, the unrestrained exercise of indulging in the negative and perversely finding pleasure in the unpleasant.

It is with this in mind that Planet Loss by Brighton’s own Blackened Sludge Grind pedlars Wallowing has been unleashed on the world. For as sure as the day is long, there is little ‘pleasure’ to be mined from this savage creation although it’s as heavy as the proverbial hippo…

Finding inspiration in Sci-fi, Planet Loss deals with heavy weight subject matter such as the ongoing march of the planet’s demise through climate change, cultural blights of racism and homophobia, the stacked class systems and the frequently misunderstood issues on mental health. Heavyweight but common subjects that are faced in a world designed to break, stress and divide us all whilst consuming the majority of our waking moments and resources.

Comprising of a single, 32 minute track that is broken into six acts Wallowing deliver an audio nasty that reminded this listener of beloved (by me anyway) Chicago misanthropes Indian and their slow and seismic battering. Following the suitably ominous and apocalyptic intro Prologue, with its garbled announcements of warnings and grim statistics laced with feedback, Earthless lurches in with a guttural scream and a huge plodding riff.

This Molotov cocktail of styles and influences raise the level of their output to incorporate a dizzying array of light and shade in a short, violent space that lives beyond the sum of their parts.

Harking back to the previously mentioned Indian, this feels like a cousin of their The Unquiet Sky release as the crushing music lumbers about like the comedown from some nightmare trip; visceral, bleak and harrowingly cathartic when it breaks out into the comparatively fast stumble. This brutally downbeat affair is not a half an hour exercise in noise, but a carefully crafted piece of immersive, experimental expression that teeters on the edge of sanity.

Wallowing comprise a calling card of talented people: from doom and black metal hardcore band Aerosol Jesus, the genre blending noise rock merchants Herd Mover, Brighton progressive doom collective King Goat to Sludge/Doomsters Pisma. This Molotov cocktail of styles and influences raise the level of their output to incorporate a dizzying array of light and shade in a short, violent space that lives beyond the sum of their parts.

Phosgene’s dense prog atmosphere features almost catchy moments that break out with almost religious fever as the gargled chorus of condemnation towards the subject matter of discrimination reaches its peak. This is then counter balanced by Hail Creation’s dense slow burn that feels almost mellow, but never once compromises the savage delivery.

To say that this is a delight is way off the reservation. I want to say that this release has a certain charm, but honestly this is like watching Pandora break the box and seeing all the horrors of the world come crawling out. There is absolutely no charm to be mined from Planet Loss as Wallowing gleefully rip open the ugliness of humanity in 2019 and hold up it’s blackened, rotten, dying heart up for all to see in 32 dystopian distilled minutes.

I wish it were longer. 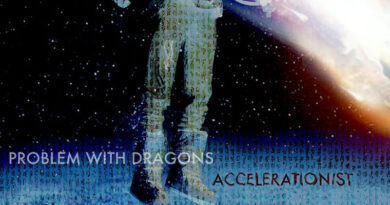