There will come a time in the future when live music is commonplace again and even Bruce Dickinson will have climbed off his confused soapbox about UK bands playing in Europe and the debate about Brexit, social distancing, masks and the neglect of the arts will have faded into the same distant memories like Pogs, or that time that Extreme Noise Terror and Napalm Death swapped vocalists for a cup of coffee.

On such a pleasant day it will seem strange to talk about Wall being a product of the ‘Pandemic Era’, a strange time where you needed an internet connection and the agreement of the rest of your household to witness your favourite band and how the genesis was a (un)happy accident we all wish could have been avoided.

Born from lockdown frustration, Wall began as the creative outpouring of Desert Storm members and brothers Elliot and Ryan Cole, trapped at home together in the UK, unable to promote their finest album to date and saw the emergence of January’s eponymous Self-Titled EP. The instrumental two piece pays homage to the influences, and music, that inspires them, highlighting the chemistry and dynamics of their main band with the seemingly telepathic bond the brothers have musically.

Six months later and following the success that lead to Wall becoming a real concern, they’re back with Vol 2, a further five tracks of muscular sludgy doom which cements Wall as more than just a flash in the pan way of blowing off some steam during the imposed semi incarceration most of the world has been enduring since early 2020.

Like the first EP, Vol 2 is almost a trademark rush of heady Sabbath style riffing and Bill Ward-esque pounding drums, but the second offering is no simple re-tread, expanding to include the classic US rock sound of many other bands that seeped into the minds of the two brothers growing up. Here the gritty blue-collar ethos and sound of Mid-West Americana adds subtle flavours to the heavy blues created by Birmingham’s finest sons.

Opening track Avalanche is a prime example of this, part Sabbath, part classic American rock, it features under the downtuned crunch, a progressive, jaunty rhythm where the dancing lead guitar adds expression and emotion to, erm, walls of powerful head banging material.

a way of staving off boredom during isolation, the Cole brothers have added a third band to their resumé that’s delivered something beyond expectation…

Given this was conceived with Ryan playing guitar and Elliot marking out the drums on his knees, to hear this come together with toms and hi-hats accenting the track, shows the calibre of the musicians as they transitioned from jams on the sofa to making this a reality. The slow, spacey passage is reminiscent of their main band Desert Storm but at no point feels like a recycled throwaway practice session.

Lead track The Tusk enters with a hail of feedback and ups the aggression where the expanded influence is more keenly felt. Nodding respectfully towards the likes of Karma To Burn, and the US stoner scene in general, this has a looser jam like feel, but in reality is carefully put together and loops back to each passage changing slightly, never settling and becoming needlessly repetitive.

Speed Freak is the love child of Sabotage era Black Sabbath and Karma To Burn with the slightly muted guitar teasing the listener before developing into a low end chug verses the higher end call and response. Here, probably more than the other tracks, the two members give each other space to express themselves and whilst the ear may be naturally drawn to the guitar, hearing the amount of constantly shifting drum styles underneath is an absolute treat, especially when the double bass kicks in.

Wall’s first EP featured the cover of Electric Funeral with The Grand Mal’s Dave-O on vocals and here they go for another cover, but this time it’s the purely instrumental, Nineteen by Karma To Burn. Recorded before the untimely passing of Will Mecum earlier this year it is, like the first EP, a love letter to the music that inspired the members, delivered with precision and style that would do the man proud. Made available shortly after his death, this was a thank you from the band to a friend that now has more gravity and weight, but is no less enjoyable.

Rounding off with the short, lush sounding blues folk of Falling From The Edge Of Nowhere, the EP closes out with shuffling toms, slide guitar and delicious 70s vibes that reel in some of the work from bands of the NOLA scene. It’s way too sort and over too soon, leaving you wanting more… which is never a bad thing.

Unwittingly Wall has grown into something bigger than its inception. As a way of staving off boredom during isolation, the Cole brothers have added a third band to their resumé that’s delivered something beyond expectation. With ten tracks to their name, it’s clear that Wall are really fucking good, too good to confine to this period and it’s great to see they’re talking about an album and taking the band on the road when the chance presents itself. 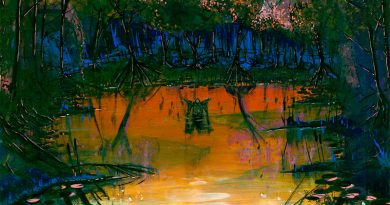