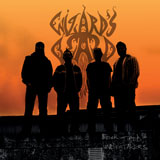 Leeds sludge-kickers Wizard’s Beard have taken no time at all to release the follow up to last year’s Pure Filth and a mere few seconds into Four Tired Undertakers‘ opening track “Subrise el Muerto” one gets the sense that we’re in for something great. The riff is fat, the drums are tribal and soon enough Chris Hardy starts screeching like a banshee. No change there then – but there’s an overall feeling of confidence and sure-footedness that was not there on Pure Filth. These guys have been working hard, gigging around the UK and Europe and it shows; they have never sounded tighter or more assured and they waste no time in bringing the pain.

“Abandon the Wolf” comes kicking in immediately after “Subrise el Muerto” allowing no pause for us to catch our breath with a huge, snaking riff while “Daemon” is full of shifting dynamics, time changes, uptempo and downtempo sections and Wizard’s Beard’s distinctive dual vocal attack from singer Chris (who sounds like what I imagine the antichrist to sound like) and bassist Neil (who just sounds like a wild boar letting rip).

Like Noothgrush, Wizard’s Beard cast vast, bleak  musical clouds of despair and “Daemon” is the dark centrepiece of the album. Final song “Harbinger” is a slow moving, relentless juggernaut that twists and turns as tortured chords chime out like the thunder breaking. At the five minute mark, when many songs would come to an end, the song finally takes off and Chris’ by-now comforting shriek heralds the shift into gear. By the end of the song the band have gone full circle back to the opening riff as the serpent eats its tail…

A deadly silence falls for two minutes before a secret track creeps in, grabs hold of your ankle and drags you kicking and screaming into a very dark place. Chris sounds like he’s crying for his dear life but the musical cacophony lets you know that he, and indeed the rest of us, are fucked. It’s a suitably torturous finish from these Four Tired Undertakers.

One of the distinctive qualities of this album is its restlessness – songs like “Seeth Inside” and “Accursed” never settle into a groove long enough for us listeners to get comfortable because they, like all of the songs, are so utterly bursting with riffs. It’s quite remarkable but it also subtly adds to the overall sense of unease that the music evokes; not only are the riffs working to unsettle you, their arrangements are too – it’s like the musical equivalent of pins and needles or heroin withdrawal.

Pure Filth earned the band respect and fans, not to mention a seemingly never-ending series of great reviews. Fans of that album will not be disappointed by Four Tired Undertakers and as far as second albums go it’s the perfect next step. The production is raw which gives the whole album a ‘live’ feel (comparable to Eyehategod’s Dopesick) and the execution is such that the album feels like it was literally recorded start to finish in one go. The band have honed their sound and have become more ambitious with the structures of their songs – they’re more complex but no less immediate, hitting hard from start to finish. The band haven’t changed, they’ve just gotten better at what they do. Don’t come to this album expecting any revelations – these guys are too busy burying the dead they’ve left in their wake.

Summon The Crows ‘One More For The Gallows’ CD 2011