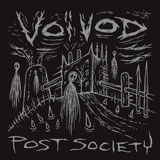 This may come as almost as big a shock as anything received at the Morgoth Science Hospital when you consider exactly how often I mention Voivod in, if I’m honest, an almost worrying amount of my reviews, but I have to admit to you that I’ve never actually reviewed a Voivod release. It’s true, I’ve covered a few live shows, but actual recordings? Nope, just never been in the right place at the right time, until now.

So it is that I feel privileged enough to be able to share my thoughts, such as they may be, on a recording that as far as I am concerned, can stand comfortably among the higher echelons of the Nothingfaces, Dimension Hatrösses and Angel Rats of the extensive Voivod back catalogue and more than hold its own, despite being ‘merely’ an EP.

I would assume, if you’re reading this, that you are aware of the fact that the current Voivod lineup features ex-Martyr and Gorguts man Dan ‘Chewy’ Mongrain in the role of guitarist, filling the metaphorically sizeable shoes of original – in both senses of the word – burning metal axe-man Denis ‘Piggy’ D’Amour, who tragically passed away in 2005, and that Mongrain had already made his first recorded appearance with the band – having originally joined back in 2008 – on 2013’s exceptional return to life and to form Target Earth. Now, for Target Earth Mongrain was joined, of course, by original band members vocalist Denis ‘Snake’ Belanger, Voivod mastermind and all-around sweetheart Michel ‘Away’ Langevin and, significantly, previously-departed-in-1991-and-rejoined-in-2008 bassist Jean-Yves ‘Blacky’ Thériault.

For me, Thériault’s legendary ‘Blower Bass’ tone was a fundamental and instantly recognisable element of the Voivod sound and the years without him, good as they still were – I’d rather have mediocre Voivod than no Voivod at all – just didn’t sit right. No offence to Gilles Brisevois, Vincent Peak, Eric ‘E-Force’ Forrest and Jason ‘Jasonic’ Newsted, but not one of them could come close to that Blower Bass tone. Alas, my joy was shortlived as Thériault left again in 2014 under a black cloud, citing irreparable differences, and a friend of Mongrain’s, Dominic Laroche was quickly ushered in, given the nickname ‘Rocky’ and the bass spot.

With that slightly ominous nickname I was poised for new material with a return to the ‘rock’ Voivod years with Jasonic, probably my least favourite period of the band, but I really should have had faith in Mongrain and what we have instead is in many ways a distillation of exactly what makes Voivod so unique and a total leap forward from the Target Earth material.

Our first taste of new material from this lineup came via the track We Are Connected, initially released on a split 7” with At The Gates, followed by Forever Mountain on a split 7” with recent tour-mates Napalm Death. Both tracks appear on Post Society, joined by three more yet to appear anywhere else – although I believe that they will be released as more split releases later on.

Forever Mountain appears first on the EP, coming after the opening title track Post Society itself, and is my first real chance to hear the track properly, having seen it performed live before being able to listen to either the 7” or the CD.

Although it sounded just peachy to my Voivod-loving ears in the live arena, the finer points and subtleties obviously didn’t come through quite so well, so it really is a pleasure to be able to focus in on Mongrain’s twisting, labyrinthine riffing and spidery discord and Langevin’s usual minimalistic, carefully measured yet utterly focused percussive thwack, with Belanger and Laroche particularly giving stand-out performances – Belanger sounding better than he has in years. Switching between throaty aggression and clean, melodic singing with more than a tinge of melancholy, while Laroche throws out snaking, midrange-heavy basslines that thread through the whole ensemble, alternatively lift and ground the sound with ease and aplomb.

With Mongrain by now firmly entrenched in the Voivod sound, it really does seem as though Laroche was the missing piece of a puzzle that we didn’t know was missing. His work throughout Post Society is brave, bold, forceful, supportive and tonally exciting to me, I almost hate to admit that I actually prefer his playing and sound more than I did Thériault’s – not something I imagined I would ever find myself saying!

Laroche’s mid-heavy rumble is the first thing we hear on Post Society itself, as he and Langevin drive the song along like the missing link between Killing Technology and Nothingface – actually a pretty good touchstone for the EP as a whole. Take the punk-influenced gallop and aggression of KT but temper it with the dreamlike twists and turns and sheer oddness of Nothingface and you wouldn’t be a million miles away from the overarching sound herein.

Post Society itself sits, to me, somewhere between, say, Order Of The Blackguards, This Is Not An Exercise – particularly during the latter portion of the song – Inner Combustion and Pre-Ignition, as far as moods and tonal similarities go, and that is sure as hell not a bad place to be.  Following on from the twisting shifts of Forever Mountain comes Fall, and, well……I think I may have a new favourite Voivod song.

Mongrain lets those acidic notes ring out while Laroche snakes around between them and Langevin tears into his drums, all suddenly lurching into a stuttering staccato rhythm as Belanger throatily sings a mournful tale that, to me, seems to be about the depression felt at the change of the seasons. Season Affective Disorder, if you will. I could be wrong though. The tempo picks up, the sounds wrung from Mongrain’s guitar get more jagged and the song as a whole tightens like a noose around Belanger’s repeated exhortation “My self is not…”. A series of solos and harmonies adds a further queasy kaleidoscopic edge to the sound as the paranoia is jacked right up, pulsing and slicing into an ending that puts me very much in mind of the ending of Nothingface‘s closing number, Sub-Effect. Paranoia very much run rampant.

The previously-mentioned We Are Connected opens and closes with the ambient sounds of an airport terminal and pushes through from KT propulsion and Nothingface ligature-tight tonality into a drifting dreamlike realm of smeared guitars and reined-in bass shot through with that computerised voice from Killing Technology, guitar solos and parts that clearly demonstrate Mongrain’s monster jazz-fusion chops before smashing back out into a tightening noose-like structure of schizoid choppy guitar and looping rhythm. Once again, Belanger delivers a fantastic vocal with that melancholic edge still in effect.

Closing the EP out we have a cover of a song that, when you think about it, is really a no-brainer of a cover with the second biggest surprise being that it has taken Voivod this long to actually cover it – I’m talking, of course, of space-rock overlords Hawkwind’s Silver Machine. You’ll notice, there, that I said second surprise. Well, the first surprise, to me, was that Voivod actually managed to make me like the song.

Heresy, I know, but honestly, whilst I respect them and their legacy I am resolutely not a fan of Hawkwind, and this track in particular. To my ears it basically always sounded like an old Status Quo 12-bar blues number with a load of whooshing and swirling noises stuck on top to attempt to make it marginally more interesting. There. I’ve said it. Publicly judge me now.

Anyway, what Voivod have done with Silver Machine is to tweak and ‘Vodify it so that it tonally now sits somewhere between their MAHOOSIVE cover of Pink Floyd’s Nile Song, from The Outer Limits, and the oddball cover of the theme from the Batman TV show that was tacked onto the CD and cassette versions of Dimension Hatröss.  That 12-bar boogie now has a biting, discordant edge, thanks to Mongrain, and the ‘space rock’ tag feels totally well-earned. They’ve really transformed the song and made it 100% their own – as with their by-now-legendary cover of Floyd’s Astronomy Domine.

It’s at this point that I realise that I appear to have written one of the longest reviews of all time, and that I’m ostensibly writing about a five track EP, not a seventy-plus minute triple album, and so I think I’d better wrap things up.

My enthusiasm for Voivod knows no bounds, and so for me this release is important as it represents a whole new chapter for the band. I am now very aware indeed that I need not have been concerned over the departure of Thériault, and that it is very clear that Laroche joining only serves to strengthen the band further as he and Mongrain help to steer the starship Voivod to even stranger, newer worlds.

In case you can’t tell, Post Society has left me ecstatic.