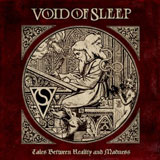 If you’re at all interested in stoner, sludge or doom metal, you’ll know that Italy is a real hotbed of talent right now. Modern giants of the genre such as Ufomammut are just the tip of the iceberg, and it seems a new band springs into existence every week somewhere in the Latin homeland. Void Of Sleep may seem like just another in a long line of such acts, but this – their debut album – certainly marks them out as one to watch, as they seem determined to leave their own unique stamp on a genre that can, for all intents and purposes, seem a bit “samey” from time-to-time.

At first listen, “Tales Between Reality and Madness” may seem underwhelmingly straightforward for a band describing themselves as “psychedelic sludge”, and even a little tame. As far as sludge goes, Void Of Sleep definitely tilt towards the lighter end of the spectrum: lead vocalist Burdo deliberately eschews the guttural growls and screams so often associated with the genre, going for a more powerful and clean singing style that lends the album a distinctive tone. Similarly, the guitar play on show here is often more complex and up-tempo than you’ve likely come to expect.

If anything, the lack of gut-crunching heaviness may leave veteran scene fans feeling somewhat let down, and in many ways the album sits much more comfortably in the category of “rock” than “metal”. But even then its sonic lineage feels slightly confused. There’s a distinct progressive undertone to many of the tracks: the beginning of “Ghost Of Me” in particular feels like an homage to the prog-rock greats. The problem is that they never seem to quite take it far enough. The more complex passages never take off into the kind of textured brilliance they make you hunger for, often feeling like a tease of what could have been before dropping back into the driving main riffs.

As for the riffs, while they lack the sheer mass you might expect, they more than compensate with their infectious groove. Some of these tunes are the kind that get into your head and go into auto-repeat overdrive, and if you’re anything like me, “Lost in the Void” in particular will be ringing around your cranium for days on end, like some sort of sludged-up Dream Theatre song. You can expect the usual comparisons to bands such as Neurosis, Down and Mastodon, and while these are not unwarranted, they never quite reach the levels of quality or purity of vision such bands display. Don’t get me wrong: fans of southern-tinged hard rock will definitely find something to like here, but if you’re looking for something groundbreaking you will likely be left wanting.

What this ultimately comes down to is that “Tales Between Reality and Madness” is an album that feels as if it’s going through an identity crisis – something I don’t say lightly in a time when strict genrefication of music has the potential to stifle creativity. Void Of Sleep’s stated aim is “to play heavy and psychedelic music”, but they never quite seem to hit their stride in either category. Of course, nurturing both of these elements requires walking a very fine line at times, and nothing about this album indicates they’re at all incapable of doing that; it’s just that they haven’t quite got the balance right yet.