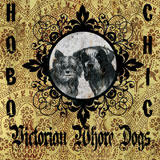 It’s hard to know what to expect from a band with a name like Victorian Whore Dogs. Hardcore punk? Antiquarian English black metal? At just thirteen minutes, ‘Hobo Chic‘ is impossible to categorise. Deftly weaving amongst post-hardcore, sludge, and doom, the band pick and combine elements from each genre to create a truly punishing cacophony.

Standing out even more than the skilful stylistic interplay is the raw, unrelenting passion. ‘Hobo Chic‘is primal, the tracks pervaded by a serious sense of desperation and disgust. Pretty unexpected from a release with a song about Conan’s requirement of magical condoms to copulate with a witch.

Adam Crawley’s guitars move from clean Fugazi-esque discord to distorted, but equally discordant, and powerful riffs. The drums of Stephen More, precise but trashy, compliment this by lending a tinny, lo-fi feel to the release. Andy Nuttall brings rhythmic groove to his bass lines, and provides aptly raw backing vocals that reach their pinnacle in ‘Krondom‘s’ infectiously simple chorus (every time I hear it I have to scream along with them).

But Danny Page’s powerful vocals are the highlight. His rasping high yells and rumbling low growls are perfectly imperfect. The occasional cracking scream lends the songs a primal and desperate air. Page comes across as a man in control of his voice, but not himself. He sounds, as their press release states, ‘deranged.’

The opener, ‘Gammy Sally,’ sets the tone well. A constant strumming of a single chord gives way to a sudden sonic assault. Distortion, crashing symbols, and unhinged hardcore vocals break forth with primitive simplicity, contrasting with Nuttall’s twisting bass lines. It is a brutal mission statement, and Page’s decision to include a brief vocal delivery like Boss Nass with rabies is a hilarious and disturbing master-stroke.

‘Dead Eyes‘ is perhaps the most ‘hardcore’ track, with a melodic and spacious riff. The bass accents the climbing melody, giving it a schizophrenic, divided quality. More’s drums are slow and off-kilter, but a china bell keeps a steady beat suggestive of a slave nation trudging towards death.  This song succeeds in capturing the band’s self-proclaimed ‘nihilistic hatred of everyone and everything.’

‘Krondom‘ stands apart from the other tracks on ‘Hobo Chic‘ due to its different, Cavalera approach to primitiveness. The main riff could have been on Sepultura’s ‘Roots,’ the vocal call-and-response is reminding me of the classic song ‘Rattamahatta.’ More’s opening toms set up this tribal tone, but there is still a heavy sludge element present. Page’s vocals are as intense as ever, with Nuttall providing an excellent vocal contrast.

The final track, ‘Prayer of Dust,’ is a perfect closer.  Opening with clean and sinister sprechgesang vocals reminiscent of later Ulver. Its another example of the stylistic shifting that Victorian Whore Dogs do so well, and it blends well with the slowly marching chorus. Again the move from clean reverbed guitars to punishing distortion and heavy china’s is punctuated by Page’s scream. This technique might get old, but each song is unique enough to avoid tedium.

For the most part I love the release’s production. The crashing drums, dissonant guitars and rumbling bass make a real impact. Page’s vocals are strong in the mix (an improvement on their previous release, ‘Fetch‘), their prominence using any flaws to their advantage. But this emphasis on the vocals makes the closing track, ‘Prayer of Dust, a little underwhelming. The heavy chorus lacks a little power due to the relative quietness of the instrumentation. It’s a minor complaint, because the song still delivers, but tweaking the instrumental volume might be beneficial in future releases.

Powerful and passionate, ‘Hobo Chic‘ delivers humour and anger with unrelenting attitude. It pains me that a band so good and so close to home (they hail from Guildford) had passed me by. But no longer. 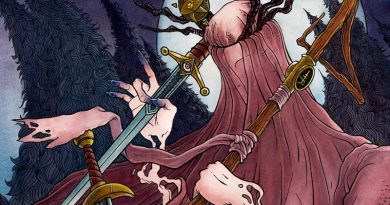