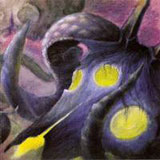 Canada. There must be something in the water there that makes for such awesome metal bands…possibly beaver pee, I’m not sure. Whatever it is, I hope they keep on adding more and more of it to the water supply, because that way we’ll keep getting bands like Lavagoat.

Lavagoat, a name that conjures up some pretty cool images, well for ME anyway, and a name that suits these four hirsute Canucks right down to the ground – blisteringly hot and EVIL. Coming on like some kind of genetic experimentation-spawned hybrid of High On Fire, Electric Wizard (when they were still, y’know, GOOD) and the more rockin’ side of Mastodon, these boys swagger and glower their way through forty-five minutes of prime-grade, white-hot METAL with aplomb.

‘Puritan’ lulls you into thinking ‘Meh, generic Stoner Doom’ upon opening with a movie sample, low-key bass and an Electric Wizard knock-off riff….BUT, once the ‘Matt-Pike-impersonating-Tom-G-Warrior’ vocals come in and the song picks up a bit more you’ll start to realise that this is actually AWESOME. Nodding along at a comfortable clip, some seriously tasty bass-fills, and a killer all-around tone soon make their presence felt, and when they break into a chugger, and you hear the word ‘Satan’, you’ll KNOW this is awesome. Throw in some sick guitar harmonies and death grunt-style exhalations and, well, that’s ME well and truly won over.

‘Old Man And The Sea’ starts off REAL strong, with a strummed acoustic intro riff that kicks in with a Mastodon/NWOBHM/Mercyful Fate feel, and some pummelling double-bass drumming. The vocals here are way harsher, kinda like Dave Edwards from Neurosis maybe, but it still sounds TASTY AS HELL. I’m particularly enamoured of the proggy bit that reminds me of later Death material that pops up three-quarters of the way through. Yessir, a real stormer.

Now, on the back it lists a track called ‘Magma’ as being next, but, well, it just ain’t there! Odd.

Never mind, though, as ‘The House’ has a serious tinge of The Obsessed to it, which will MORE than make you forget the missing track. I swear, if Wino sang on this one, you’d think he wrote it, which is a VERY good thing indeed! Again, lovely bass-runs abound, and the vocals are much less harsh for this, with a bit of a throaty Tommy Victor thing going on…which I like. I’m guessing that bassist/vocalist Sean and guitarist/vocalist Graeme trade off on vox, hence the differing styles. I dig it, keeps things interesting. Lavagoat whips it up into a gallop in the final throes and has some swooping and diving psychedelic guitar stuff going on too, adding to the atmos nicely.

Now, ‘Rome’ comes in on pounding drums and guitar feedback, from out of which comes a MONSTROUS, ominous, chugging riff, alternating with a trippier, smeared-sounding version of said chugger and those near-enough death metal harsher vocals. I’m reminded of some of the choicer nineties Death/Doom, but with a proggier, spacey edge. This is one of the standout tracks for me, with the harmomised and FX’d guitar parts, gurgling vocal parts and chopped up scream samples behind the dragged-out chugging really adding a crazed feel to it. KILLER.

‘The Witch’ continues the cosmic lysergic Death/Doom thing, soaked as it is with delayed, reverbed and flanging guitar and tombstone-grating throaty vocals. Early Paradise Lost play Chrome? Trippy in excelsis. Out of the acid we also get a sterling High On Fire-esque charger of a riff with some more tasty licks astride it’s metal flanks, including a bunch of highly-Mastodon-esque harmonised flourishes and an egyptian-themed run that is PURE Chuck Schuldiner, which excited me greatly on first listen, and still does now. LOVE IT.

‘Interstellar Deserts’ warps from droning, feedbacking cosmic ambience to ominous Wizard-style doom with a groove, into vast, space-cathedral sized FX-soaked DOOM and out into a slightly more uptempo rock-out ala Cathedral. Vocally we get a kinda cross bewteen Jus Oborn and Justin Broadrick, which is odd but works.

‘Azathoth’, despite the reference to the ‘blasphemous nuclear madness that bubbles at the heart of space’ of Lovecraft’s stories, is actually a plangent, contemplative instrumental palette-cleanser…at least to begin with, but when the guitars kick in, has a real Kyuss vibe to it. Again with the cosmic themes.

Closing number ‘Cursed Emperor’ is a real stormer of a track with a NWOBHM feel to its galloping riffage and dynamite harmonised axes that really pile-up at one point. Vocally, we’re back in low-end, throaty harsh territory again which really adds to the urgent, driving feel of the track as a whole.

I’m seriously digging the bejesus out of Lavagoat, and they really have pushed all the right buttons for me – cosmic tentacles on the cover of the album, Lovecraft refs, guitar harmonies, tasty riffing, nods to Chuck Schuldiner and a general ‘High-On-Fire-plays-a-less-tricksy-Mastodon’ vibe, hell, what’s NOT to like? Go check ’em out.