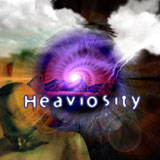 Heaviosity is a cracking release from newly formed UK label Gallipoli Records. Although not completely original in concept (who remembers the ‘Contains No Holy Additives’ Comp CD’s from the late 90’s?), it’s a refreshing change to see that all 16 bands, who come from both sides of The Atlantic, are all unsigned and with it relatively unknown, which gives the listener that rare chance to be exposed to some great new music/bands that they may have quite easily over looked in the past.

As mentioned, this disc features 16 bands who contribute 1 track each which all fall under the Doom/Stoner/Sludge banner in one way or another and results in the whole CD lasting a whopping 79 minutes, so there’s plenty going on to keep you entertained!

The full running order is Obiat, Drift, Iron Hearse, Sada, Core Of The Earth, Palace In Thunderland, Suns Of Thunder, Ditchliquor, Agnosis, Outburst, Centrifuge, Color Of Darkness, Anti Climax, Whores Of Tijuana, Salt Of The Earth & Mothertrucker and although there really isn’t a ‘bad’ song amongst this motley crew, some did appeal to me a lot more than others, but overall the entire CD was an enjoyable listening experience which rarely got me reaching for the ‘skip’ button.

The highlights for me included the opening band, which is always crucial to get exactly right when compiling a compilation, which I’m happy to say they did just that with London based Obiat and their 11 minute Stoner drenched Doom offering ‘Stare The Distance’ complete with massive riffs, pounding drums which breaks down into a tripped out & spacey mid section before building back to their Doom roots!

Iron Hearse, a band who’s name has been on my radar for a few months now and they didn’t disappoint with their ‘Temples Of The Gods’ track with it’s huge Doom riffs, mournful ambience and Wino influenced vocals which certainly gave them a feel of ‘The Obsessed’.

Sada up the tempo with their Groove riddled take on Stoner Rock, their featured track ‘On’ with it’s catchy guitar grooves, rockin’ riffs & gravel vocals will get your foot taping & head nodding in no time at all and would certainly appeal to fans of Clutch, COC, Kyuss etc.

Palace Of Thunderland’s ‘Sonic Throne’ is an interesting track with a huge 70’s Rock/Metal vibe going on, kinda Led Zeppelin meets Hawkwind meets Blue Cheer with it’s laid back vocal approach and full on rockin’ riffs that feature some fantastic guitar work, definitely a band trapped in the wrong era!

Outburst, a band who I’ve already got a bit of a soft spot for deliver some heavy, riff driven Stoner Rock with their track ‘Orange Alert’, it’s taken from their demo ‘100 Tonnes Of Stone’, which I’ve already reviewed elsewhere on this site.

Anti-Climax, although they felt a little out of place on this comp with their track ‘Earn Your Spurs’, you couldn’t help but be dragged along with their ferocious Crust riddled Sludge with it’s chugging guitars and crazy screamed dual vocal attack, reminding me in places of the legendary Doom!

Whores of Tijuana’s ‘Trip Manhattan’ is a more mellow affair with heavy spaced out guitars, casual vocals and rockin’ grooves which I guess would come under the banner ‘Desert Rock’ as it does have a big ‘chilled out’ Kyuss feel going on throughout it’s entirety.

And lastly Mothertrucker, a band I’ve reviewed, interviewed & raved about elsewhere on these hallowed pages, expose us to their own unique brand of Red Sparowes come Isis inspired Instru-Metal with their track ‘Waxing The Shaft’, a band you should certainly be checking out!!

Overall an excellent release which will hopefully give some much needed exposure to some great bands and although I’ve only got the promo version, Kev of Gallipoli informed me that the retail version contains a short bio, photo and website links for each band, so for the measly sum of 3 quid, you really have no excuse not to buy this authentic slice of Underground history!