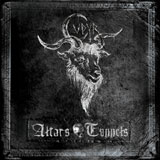 Bulgaria. Not a country that is well known for its metal in the rest of the world. However, there are some ghoulish devils crawling about in the shadow of the iron curtain! UPYR hail from Sofia and with their self-released album they raise the banner high for Bulgaria.

UPYR sound like the result of the hellish union of Neurosis, EyeHateGod and Hellhammer. Utterly dark riffs, drums that are cavernous and pounding and vocals that rip your flesh. These are the offerings UPYR lay upon the altar.

The unholy mass starts off with ‘Before The Altars Of Necrotic Karma’. From the hissing noise of a rusted cauldron a riff emerges. Slow, brooding and with a serrated edge, it cuts through the fog and brings forth a droning, suffocating slab of black tinged doom. A strong Neurosis influence is noticed here, but UPYR is a tad bleaker and more minimalist in their approach. One imagines oneself wandering through a city made up off colossal concrete buildings that have been abandoned many years ago. Tattered curtains blow in the wind; the windows they once covered have been broken by some sort of blast. Walls crumble and the road is cracked and overgrown. In UPYR‘s world, light is a grey hue and all seems covered in a fine layer of ash. After a while we come to the second track of the album.

We descend ‘Into The Tunnels Of My Sleep’. Here the screaming voice makes way for a heavy spoken word part. The guitars are soft and almost soothing, drum and bass are held back and then another wave of heavy crashes in, the voice now screaming with utmost hate. The concrete has made way for tunnels carved into the ancient earth and it is noticeably colder and darker here. The air is thick with moisture and brings down our speed to a crawling pace. We almost stumble and fall when the incline becomes steeper and our tempo picks up. In the end we come to a vast, dark hall. Here, deep beneath the earth, the third track begins.

Voices echo and clean, strummed guitars reverberate all around this subterranean temple. ‘A Hymn To Pan’ is raised! For over four minutes a calm voice recites the holy words, only to become a bit more emotional after about five minutes. Here the guitars get more distorted, while still being quite minimal. Drums and bass are completely silent during the mass. The voices wail: Io Pan! Io Pan!

For the CD, this is where the ritual ends. For those of you that like to support the old school tape format a bonus track is included by the name of ‘Welcome To The Ritual’. A more grooving piece which reminds me more of EyeHateGod and perhaps a bit of Hellhammer. Sound wise this is a bit rawer than the other offerings. The speed is also quite a bit higher throughout the track. There is even room for a guitar solo and in the end it seems the band ventures into grind territory.

‘Altars/Tunnels‘ is an impressive first offering from UPYR and leaves me hungry for more! I am sure these lads have a bright future ahead of them.