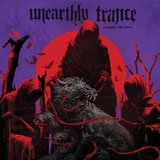 I first heard Unearthly Trance on their 2009 split 10” with Swedish doomers Suma, but the New York trio have been around since 2000. The band officially called it a day in 2012, all three members – bassist Jay Newman, guitarist/vocalist Ryan Lipynsky, and drummer Darren Verni – joining with legendary ex-Electric Wizard and Ramesses bassist/guitarist Tim Bagshaw under the guise of Serpentine Path. Then in April 2015 Unearthly Trance announced that they were getting back together and working on new material for an album for Relapse Records. Stalking The Ghost is Unearthly Trance’s fifth full length album, and their first new release (excluding 2014’s compilation Ouroboros) in seven years.

So how does this new record compare to what’s gone before? Well, perhaps in a direct (or indirect) reaction to the stupefying doom of Serpentine Path, there seems to me to be more of a driving rhythmic element to Stalking The Ghost as compared to its predecessor, 2010’s V. I get the feeling that providing vocals alone for a few years has given Lipynsky itchy riff fingers.

It’s not what you’d call upbeat by any stretch of the imagination, but opening track Into The Spiral has an almost Death n Roll drive to it. Lipynsky’s vocals remaining gloomy and savage as ever.

There’s plenty of concrete slab heavy doom-sludge on tracks like Dream State Arsenal, and Invisible Butchery, but there’s also the likes of Lion Strength whose outro builds (somewhat unexpectedly) to an elated, sludge-blues conclusion. “Conquer the invisible!” Lipynsky raw-throat bellows before launching into some tasty lead work. The epic The Great Cauldron closes the vinyl and CD versions of Stalking the Ghost, but there’s also a digital exclusive bonus track in the form of The Forest Keep. This final final track is an atmospheric soundscape providing the backdrop to some fine spoken-word doom poetry, which kind of broadened the horizon of the entire album for me.

Stalking The Ghost is definitely a progression from where Unearthly Trance left off five years back, but it’s a logical one which fans of their previous albums will definitely appreciate. Not only are Unearthly Trance a band who helped to shape the sound of 21st century blackened sludge/doom, they continue to evolve and progress, proving to be just as brutal, heavy, and important as they were seventeen years ago.