Allow me to begin by saying that I’m in no way what one might consider a progressive rock/metal aficionado. Sure, I own the classics. King Crimson, early Rush, even Yes’s Fragile. I’m in tune with contemporary prog-metal such as current-era Mastodon, The Mars Volta’s discography is in my record collection and gets spun on a semi-regular basis. So, while not necessarily my favorite genre in the heavy music realm, I do have some sonic experience with prog.

I came into this review, excited about the prospect of expanding my prog horizons, as I quickly volunteered to review The Green Chapel, the third album by London prog/doom peddlers The Osiris Club. First of all, great name. I’m guessing they’re named after the fictional secret society appearing in Darkhorse Comics Hellboy series. I’m also digging the promo pix. Maybe it’s seeing the world through COVID-colored-glasses, but I found the band members sporting plague doctor masks to be a nice, pandemic-related touch, that also goes well with their aesthetic.

The Green Chapel announces its presence courtesy of Andrew Prestidge’s drum roll before the band erupts into the airy, spacey opening notes of Phantasm. This song serves as a great dual-purpose introduction to both the band as well as a great album opener. The song moves along briskly, taking many turns, and tempo changes, before a well-placed synth ‘riff’ from co-lead singer and synth player Sean Cooper takes the song into a different direction, adding some riffage courtesy of guitarists Chris Fullard and Roland Scriver.

Moscow changes the mood slightly offering a sound akin to a cross between UK post-punk and Crack The Skye-era Mastodon.  Cooper gets slightly more aggro in places with his distorted vocals, as it works well to serve the song in the chorus. Moscow is a mover of a song, a catchy, straight-forward less-proggy song, that’s sequenced well on the record.

Moving into the first of two multi-song suites on the album, The Inmost Light Part 1 opens with some nice riffage form Fullard and Scriver that’s accented with some synth flourishes across the top courtesy of co-vocalist Simon Oakes, who takes over lead vocals on this track. Right off the bat, the cowbell is a nice touch, as is the saxophone courtesy of Hanna Petterson. The sax coupled with some riffs, as well as the overall vibe, instantly has me thinking about 90s Alternative rock band Morphine.

The Inmost Light Part 2 is an entirely different mood, opening with some chimes and a nice single-note guitar intro as Oakes stays on vocals offering a way more soaring approach. The sax is still present, as the band does a good job of building the song before descending into a, dare-I say Tool-esque, outro. Lots of synth affects are sprinkled as the song slowly fades out.  This two-song suite complimented each other well and displayed the bands versatility.

The Osiris Club offer up a dizzying array of sounds, moods and tempo changes…

Diamonds In The Wishing Well changes the tempo again, with Cooper taking over on vocals again, and Petterson’s sax is still present. I must say, the saxophone in a prog-rock context works well, and definitely adds some originality to the band’s sound. Count Magnus explodes out of the gate with a prog-cacophony of sounds and tempo changes. However, it works and isn’t distracting. The Osiris Club do display a nice sense of melody throughout as well.

The Green Chapel 1: The Green Chapel begins the second multi-song suite of the album, the title track, split into four sperate parts. The Green Chapel 1… is an expansive song that starts out as a mid-tempo riff rocker accented with Petterson‘s ever-present sax, before dropping into a spacey, synth-y outro. The Green Chapel II: Blind Hare & The Pale Lady opens with the first audible (to my ears) acoustic guitar. It’s a pleasant little intro, as Oakes is back on vocals. Not that it’s noticeable, and I don’t mean that in a facetious way, Oakes and Cooper’s voices blend so seamlessly coupled with the myriad of effects, makes for a very fluid transition between them.

The Green Chapel III: Winter’s End offers up a doomy riff to open proceedings, as Fullard and Scriver lock into Prestidge’s groovy, swaying rhythm, making this by far the heaviest cut on The Green Chapel. The song fades out with some great lead work before ending abruptly. The Green Chapel IV: My Lord The Sun then totally switches gears, presenting a nice (Hammond?) organ to open the song, coupled with a myriad of synth sounds and Patterson’s sax makes a return as well. It’s a mellow, progg-y end to the four-part title track.

The Green Chapel doesn’t end there however, The Crow brings the record to its finale with another airy, spacey mellow song, that serves as a suitable closer to the record.

All in all, The Osiris Club offer up a dizzying array of sounds, moods and tempo changes, coupled with all sorts of instrumentation. Patterson’s sax adds a nice touch of individuality to the songs she’s featured on, and the band actually push quite a bit of air when they get moving. When appropriate, Fuller and Scriver’s riffs are crunchy and doomy, and Cooper and Oakes vocals and synths weave seamlessly with each other between songs, the two vocalists never sounding jarring as one makes way for the other

The Green Chapel is a cool release, by an interesting band that offers up a unique take on prog, both musically and lyrically. Recommended. 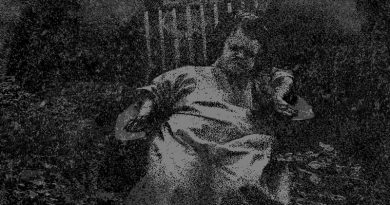