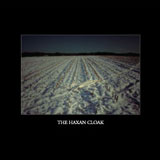 The overarching sense of menace, of encroaching dread is palpable throughout the entirety of this, the self-titled debut full-length recording by The Haxan Cloak. Sound artist Bobby Krlic – The Haxan Cloak is essentially he – paints a dissonant aural picture over the course of forty-five minutes, tightening the noose as he goes. You wanna talk about ‘dark’ and ‘grim’? Black Metal WISHES it was this spine-chilling and shiver-inducing. If this had been the soundtrack to The Shining, it would have never been released for fear of causing mass nervous breakdowns and a rash of suicides.

I haven’t been so emotionally affected by a record since Scott Walker’s twilight abyss ‘The Drift’ swallowed my soul, but it’s an abyss I fall back into gratefully.

The principal palette herein is of cello, violin, sparse percussion and textural sound, nary a guitar in earshot, but as any admirer of avant-garde composers such as Ligeti, Penderecki and Crumb knows, a correctly applied string section can cause all manner of emotional damage. Those prickles running up and down your spine? The cold sweat on your brow? They weren’t brought on by a shrieking painted clown with an elaborately spiked guitar, no sir, ’twas horsehair on catgut that got you looking over your shoulder during ‘Burning Torches Of Despair’.

Best taken as a whole and listened to in one sitting, allowing the abstract thumps, clanking chains of unseen ghostly dread and mournful air-raid sirens to fully penetrate the ears and the icy fingers of droning gut to wrap themselves around your heart, this recording is intimate and personal, it knows YOUR fears.

From the opening THUD, creak and groan of opener ‘Raven’s Lament’, the sound insinuates, seduces and magnetizes the ears – so drawn in that you couldn’t escape even if you WANTED to. Dissonant swarms of violin, slow drawn-out cello, creaking, cracking, thwacking percussion, situated right up front, and an eerie sudden xylophone motif are the sounds heard here, suffused with that dreadful twilight ambience. ‘An Archaic Device’ is icy fingers of droning violin gently brushing up and down the spine, gaping chasms of near-silence, broken by otherworldly keening buzz, and the general feeling that something very bad is VERY near. Krlic toys with the tone, distorting the entire grain of the track, as it becomes an old degraded radio broadcast from some distant era.

The afore-mentioned ‘Burning Torches Of Despair’ is built up from a processed slow-mo see-saw of cello, embroidered with a fizzing, hissing static and punctuated with seemingly random mechanical clanks, cranking sounds, metallic clangs and half-captured conversation. Claustrophobia in aural form.

‘Disorder’ overlays what may be the quick strumming of a deadened acoustic guitar, sped-up to resemble the frantic ticking of a clock’s second hand, with a looping drone of slippery violin to disorienting effect. In the end, we are left with only the ghost of that skirling hum and nothing more. ‘Fall’ is low-key and sombre in tone, a track built of ambience. The husk of an elegiac violin and a distant choir of sometimes harmonious and sometimes askew wordless voices give it form.

‘The Growing’ is slow-motion violence. An initial burst of electronic distortion and percussive force gives way to a throbbing pulse that winds its insidious way into nothingness. Those deadened, strangely insectile strummed acoustic guitar sounds return, entwined with a subtle throb of feedback, until they too are subsumed into a dubbed-out drumbeat that sounds within a fug of low-end murk. The drums erupt into a sudden, violent blastbeat, then die. A bass-note that is felt more than heard is left.

‘In Memoriam’ is another mournful number that moves as though submerged in molasses. Syrupy-thick cello strokes and keening violin move in time to the slow, measured sound of an echoing brushed snare drum. Overtones of what may well be an oboe and the ghostly afterimage of a trumpet permeate the upper air.

‘Parting Chant’ is the end. A cavernous space that echoes with distant percussive sound and a general drear ambience. Shuddering slabs of bass lunge from nowhere as a stretched, wailing voice fills the space in front of us. Violin unfurls with a flourish as everything builds toward a conclusion that doesn’t come. Everything dies. In the end, there is nothing left but black, emptiness.