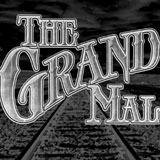 What do you do when you’re busy as all hell juggling work with being in a band, writing new music, promoting gigs, touring, girlfriends, boyfriends, families, pets and all of life’s other general clutter? Yep, that’s right, give precisely zero fucks and start a whole new band with your best like-minded mates, which is exactly the cause of new Oxford UK entity The Grand Mal. Formed by Desert Storm‘s identical twin brothers Ryan (guitar) and Elliot Cole (drums) alongside Mother Corona‘s spiritual core of Lee Cressey (guitar) and David Oglesby (bass, vocals), The Grand Mal have set their course on defining a bluesy brand of the hard rock templates its collective members have already mastered more than capably. This three track debut EP nods its cap towards both the crunchy swagger of Desert Storm and the grungy psyche-rock of Mother Corona, whilst leaving plenty of sun-baked road ahead for us to look forward to.

Opener No Man’s Land holds nothing back from the off with Cressey and Ryan Cole’s strident, grit-infused riffs pummelling away next to some swaying, sliding, swampy guitar licks. Elliot’s toe-tapping beats and intelligently-honed fills meanwhile paint a musical background that floats from the North Carolina hills right down to the Mississippi Delta. Behind the mic, Dave’s sickly sweet odes to loves once lost and taking a chance on new beginnings provide a muscular start to this get-in-the-van, good time rock.

Black Spiral hits heavier with a notably Black Sabbath-laced groove. Lee and Ryan bend strings like Tony Iommi at a hammock fair as Dave channels his inner Layne Stayley over and above Elliot’s righteous skin pummelling. Cressey’s warped, distortion-frying solos and closing surge in pace are perhaps the highlights of this otherwise somewhat flat doomy jam, but the vibe is certainly there even if the dynamics are not on this ditty, that will peak the interests of fans of the likes of sHeavy and Freedom Hawk.

Closing out with the bullish refrain of Pig In The Python reminds you of just the sheer depth and breadth of experience and knowledge The Grand Mal‘s collective members will have gained from touring with the likes of Karma to Burn and Orange Goblin. Cole and Cressey’s coiled, springy riffage leads out into that swaggering drum n’ bassline that’s had Desert Storm compared to Clutch since their very inception, whilst Dave’s throaty tales add Mother Corona’s knack for making everything thoroughly brooding yet light-hearted all at once.

As we’re fizzled out by another of Lee’s boogie-licious solos, ultimately it becomes clear that The Grand Mal are not here to try to reinvent any wheels on this thoroughly jammable and hummable debut EP. But what they do is play with a passion from the heart whilst exhaling that confident air of having a fucking good time through the heathen powers of rocking the fuck out. Can you ever ask for more? Maybe sometimes you can, but this is well worth a weekend trip to the grand musical mal of Bandcamp next time you’re out shopping for riffage.