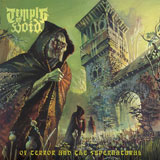 Temple Of Void are a death/doom five piece from Detroit, Michigan, USA. Together since 2013, Of Terror And The Supernaturalis their first full length release (originally coming out in 2014 on Saw Her Ghost and Rain Without End Records, re-released this year on Shadow Kingdom Records). As the name suggests, there’s more than a whiff of the grandiose and the Gothic about the whole thing. There’s something about vocalist Mike Erdody’s (Acid Witch, Faded, Harbinger) low, slow, delivery that brings the Byronic vampire to mind as opposed to something more raw, frenzied, or bestial. Cast your mind back to the early 90s when death/doom became a thing and project an imaginary space on your cassette shelf between (let’s say) Lost Paradise and Turn Loose The Swans; Temple Of Void have done their very best to fill that gap, albeit in a rather more head down, straightforward way, with Of Terror And The Supernatural.

The Embalmers Art comes galloping out of the trap in full-on death-mode but soon slows to a doomy lumber with a bit of melancholic melodicism. It’s as good an introduction as any to the sound and dynamics of Of Terror And The Supernatural, laying down the essentials of what follows. In essence (to my old man ears, at least) you get a bit of Swedish death and a bit of English doom. And that’s not a bad combination at all. Savage Howl has, at its core, a simple but effective monster of a nod-along riff and feels very much like the “single” – that bit more upbeat and assessable than the rest but with the same doomy, gloomy air to it.

Beyond The Ultimate is much more of a gloppy, doom stagger with plenty of proper metal lead work from guitarists Alex Awn and Eric Blanchard. Invocation Of Demisedigs deeper, pounds harder and features a weird, fluttery horror soundtrack organ sound that helps to make it one of the more genuinely Stygian sounding tracks. To Carry This Corpse Evermore is an instrumental aeriform synth and reverb soaked acoustic guitar interlude.

Rot In Solitude‘s grandiloquent guitars and pulsing heartbeat bass and drums once again conjure the cassette tape heyday of 90s death/doom. That’s not to say I think that Temple Of Void are trying to sound “retro” (my God, are the 1990s retro now?), just that they’re getting it right. Exanimate Gaze, more of the same with some bigger, chunkier riffing and pinch harmonic accents.

Closer Bargain In Death (which, like it’s forerunner and Beyond The Ultimate appeared on the group’s Demo MMXIII) is a serious, black doom mope-along with a wonderful (if textbook) drop-down as lead into a big, big soloing session.

All in all there’s more death in the front-end, more doom in the back and a fair sprinkling of trad metal throughout. No moulds have been shattered in the making of Of Terror And The Supernatural, no barriers broken, yet it works really well and holds together not just as an album but as the sound of a band with a conscious and controlled direction. I have no doubt that Temple Of Void achieve everything they set out to with Of Terror And The Supernatural; this is the record they want you to hear, and it’s definitely well worth hearing.