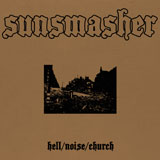 Scottish crust/sludge outfit Sunsmasher hit home with a brand new and relentlessly savage EP entitled ‘Hell/Noise/Church’ – seemingly self-released, these Glaswegian upstarts show massive promise indeed, bleak, heavy and entirely nihilistic ‘Hell/Noise/Church’ certainly delivers. This particular strain of hardcore influenced sludge metal is par for the course these days, especially after bands such as Conan and Dragged Into Sunlight bringing this sound to the (relative) masses, do we really need another? The answer is of course a resounding yes, as out there in the sea of mediocre clone bands you do, from time to time, uncover a few gems and this is one of them.

Clocking in at around the 17 minute mark, there is hardly a lot to go on, but from the opening salvo of ‘Axe To Grind’ you know Sunsmasher mean business, booting you in the groin with a barrage of blast-beats and strangulated, vitriolic vocals taking massive prominence to ram home the message in no uncertain terms. The fast pace drops off to a more familiar dirge of downtrodden and anguished sludge metal, the obvious reference here would be to Dragged into Sunlight’s debut, that claustrophobic and intensely heavy vibe is there in all its glory, but these guys take things in other directions, lots of bluesy moments popping up amongst the black metal inspired atmospheres and the crusty d-beat edge just sets things off nicely, a contagious opener!

‘Redeemer’ takes the bluesy edge and runs with it, before dropping a few octaves and snapping necks in unison, the vocals kicking in certainly give rise to the hairs on the back of your neck, executing a near perfect drop in reminiscent of some of Iron Monkeys finest moments. The whole track builds to the final few bars where everything erupts and you can certainly see this being a great live track to get the crowd seething. ‘Perdition’ rounds off this release with another heavy dirge like foray into crusty blues and self-harm in equal measures, there is nothing pretty here whatsoever, just an unforgiving but highly cathartic ride into the bowels of hell and back.

Sunsmasher are definitely worthy of your attention and for a whole two pounds you can grab ‘Hell/Noise/Church’ from Bandcamp and relish in their unholy racket. It is also worthy of note that the finishing touches to the EP were employed by a certain James Plotkin (Khanate/O.L.D) who really brings out the ominous atmospheres and adds a definite gravitas to the whole affair, Sunsmasher mean business and I am sure we will hear a lot more of this band going forward. 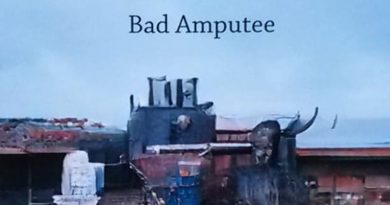