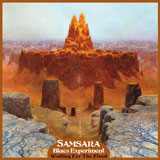 ‘Innovative” is a word that is bandied about far too readily these days, particularly in the context of new music. It’s almost as if for something to be good, by definition it must be innovative. Cue Samsara Blues Experiment’s new record ‘Waiting For The Flood‘, and the same clichéd kudos are being thrown around again and again. But does it live up to the hype?

Well, yes and no. Before I delve into this, let’s get the issue of quality out of the way: this is a really good album that fans of classic blues/stoner/prog rock should definitely check out. It’s chock-full of great riffs, the recording sounds amazing and the seamless transitions between the four (yup, only four, prog fans!) tracks is flawless. If you haven’t listened to this band before, this is a great place to start.

However, after this point I’m afraid I have to differ from the online consensus. If there’s one thing I would say about Samsara Blues Experiment (besides the fact that they are just plain good), it’s that the “experiment” part of their name need not apply. There’s nothing really new or experimental about the band or their style, and when you think about it, how could there be? Their stated aim is to recreate the sounds of 70’s stoner/prog rock for a modern audience. And while this is a highly enjoyable album that I’m sure I will go on listening to for some time, they are retreading the footsteps of the past rather than carving a new road into the future, and audiences need to know that. All this talk of “innovation” is completely misplaced.

Take, for example, the final track ‘Brahmin’s Lament’. A trudging leviathan of a song, it represents perhaps the most original material on the record. However, take a few listens and you’ll no doubt peg a great number of influences from your own collection. The judicious use of middle-eastern style scales – the Phrygian mode in particular (sorry, my inner-music nerd couldn’t be restrained on that one) – and the languishing, sitar-driven mid-section call to mind many bands reaching back into the past half-century, from Led Zeppelin to King Crimson.

Even more on-the-nose in its homage is the title track ‘Waiting For The Flood’, which the band references as heavily influenced by Jimi Hendrix and Carlos Santana on their own website, not that that wouldn’t be obvious on even the most perfunctory of listens. The band wear their influences clearly and proudly on their sleeves, and even go so far as to pigeon-hole their sound as explicitly from the mid-70’s; a concept that seems a little funny to me.

However, while great artists often imitate, they don’t always do so perfectly, and one way in which Samsara Blues Experiment don’t quite live up to their idols is in Christian Peters’ vocals. I couldn’t help but feel that his delivery seemed overly-powerful and cut through the music too harshly. If I may make a fairly obvious analogy: it’s sort of like sitting down to a delicious-looking meal to find that the chef has gone crazy with a particular herb, overshadowing all the other flavours. At times, there really is a sense that a little restraint would have benefited the album enormously. And as is usual, after repeated listens the disparity between these elements becomes a little less noticeable, but it would have been better if it was never there in the first place.

Still, this minor complaint does little to mar what is otherwise a great achievement. There are some great hooks, liberal use of “psychedelic” tropes and moodiness aplenty. In short, this album is just fun to listen to… and surely that’s what matters. Because despite all the hype and talk of “innovation” surrounding this music scene right now, Samsara Blues Experiment would do themselves a favour by cutting through all that bullshit and putting forward a much simple, truer message: innovation is overrated.