Steve Austin has proven over a career spanning twenty plus years that he is one of music’s great survivors. His work with Today Is the Day is widely regarded, albeit still under appreciated, as being the product of one of the most innovative and creative minds of extreme music.

Never a man to shy away from taking a scalpel to the darkness inside humanity and inside himself, Austin has previously used a mixture of electronics, conventional instruments, recording techniques and samples to create a howling cacophony that is as reviling as it is beautiful.

In the 2017 documentary The Man Who Loves To Hurt Himself, as well as cataloguing the events following the release of Animal Nature upon the world back in 2014, Austin stresses how his brain won’t allow him to repeat himself and the internal release of addressing the issues of the moment, working them out through music so that once they’re done with it is time to move on.

Unsurprisingly then No Good To Anyone carries some serious weight with it.

The opening track channels pure lurching doom, the hideous creeping riffs overlaid by Austin’s laconic drawl as he half speaks and whispers his neurosis into your ear. No Good To Anyone speaks of frustration and builds on unsettling, woozy, pulsing notes as his voice becomes scratchier and more unhinged before the band tumble into a blend of black and grind. Clocking in at over 7 minutes it seems to be business as usual as the song collapses with fatigue with the man intoning ‘I hate everyone’as weary sounding as the toll of the last few years must have been.

After this, the album becomes more of a storied experience that relies on lyrical themes and the starkness of the music, rather than becoming a sonic torture session. As ever the drums are front and centre, almost more important than any other instrument and are handled deftly, but the music leans more heavily on the psychedelic and progressive than the avant garde.

Attacked By An Angel is a deliciously fuzzy soup of reeling melody that dances on the cusp of madness, the bright guitar tone almost shining over the unhinged vocal stylings like words being spoken through a rictus grin. The stomping Son Of Man opens with ‘Let me tell you a story, a real good story, about me and you’ over menacing drums and droning guitar not disguising the fact that a ‘real good story’ in the world of Today Is The Day isn’t going to be all sunshine and roses. Instead,  this tribal dance moves along with the kind of swaying, shamanistic feel that conjures the hypnotism that Austin has talked about in the past – it’s easy to get lost in the simple feel of it.

Burn In Hell crashes this mellow vibe, not with blast beats and death metal riffing but a mid paced track that comes across like some of Hank III’s heavier output. Here the drumming does most of the work to keep the listener off balance whilst the distorted, multi-layered vocals suck you in until the short piece explodes with the first real musical volte face recalling the manic spite of earlier records and bug eyed vocals screaming ’I won’t be there when you need me’.

No Good To Anyone [track] speaks of frustration and builds on unsettling, woozy, pulsing notes as his voice becomes scratchier and more unhinged before the band tumble into a blend of black and grind…

Naturally You’re All Going To Die is almost Sub Pop era delicious shiny indie grunge with double bass infected by fractional moments that won’t let you forget that these are songs created by a mind who quickly tires of the norm. Austin deliberately sets out to challenge himself and unsettle the listener, but let’s face it, if you’re no stranger to Today Is the Day none of this will come as a surprise to you.

This album, more so than those than have gone before, feels more introspective, if that’s possible. Maybe it’s a sign of the current crop of innovators are reaching a point where mortality and a realisation that the road ahead is shorter than the one behind is prominent. Austin himself has said he will do this until he can’t stand the pain and No Good To Anyone feels the weight of all that has happened since Animal Mother.

The blues influence on that album has also spilled into this one and Cocobolo speaks volumes about the mental state of the man as he talks of vulnerability in one voice and almost bipolar like, switches to brash over confidence the next.

The album is not littered with technical acrobatics; the songs are less prone to the AmpRep era freakouts that Austin has often been associated. Like on Callie, it’s a folk driven, acoustic track that recalls more country and later era Neurosis, despite being scattered with electronics, but somehow stark and crushing as the lyrics rip the rug out from you. OJ Kush however pours spite on you from a great height.

Mercy recycles the doom pop themes of earlier whilst dragging everything into a downward spiral repeating ‘none of the sheep will survive’ as a mantra. This could be seen as direct channelling of Austin’s own psyche as he endures trends and musical fads to just be here and hell-bent on his mission ‘to drive you fucking nuts’.

The album closes with the trio of Born In Blood, Mexico and Rockets And Dreams. Predominantly soft in nature with a multitude of instruments, the message is very much conflicted between pain, weariness and the determination to survive in a Godless world, the need to find the self and the worth of who you are. This surely is the point of Today Is The Day.

To some it may not be the savage blast of fetid air they hoped for recalling the ‘glory days’ of Temple Of The Morning Star and Eyes Of God, nor may it be as polarising in opinion as the sprawling Sadness Will Prevail. With No Good To Anyone, Austin has delivered an album that, if allowed, will nag at you and sink it’s hooks into your brain when you’re alone in the dark. 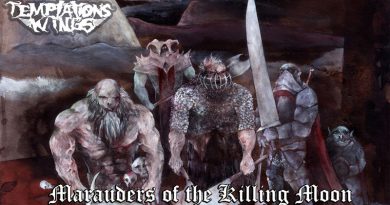