How do you criticize misanthropy if everyone in the world actually deserves to be hated? So begs the question when listening to Rainbow Grave’s 6 track sludge punk debut No You – worthiness of human life aside, the Birmingham quartet, led by vocalist Nicholas Bullen (founding member of Napalm Death and co-founder of 90s industrial dubstep act Scorn), set out to prove why living in a perpetual state of blissful ignorance about the terminal condition of the world and life in general is a far worse fate than just putting a bullet in your head. To hell with anti-establishment and simply stamp a target on everyone’s back and be done with it. This brand of addictive nihilistic sociopathy doesn’t just form in a vacuum – it takes years of momentum to gain the strength to take blistering form.

With a lineup including John Pickering (formerly of Cain, Doom, Police Bastards, among others) on guitars, Nathan Warner (Bee Stung Lips) on bass, and James Commander on drums, the band often relies on a foundation of improvisation, taking one driving riff or rhythm and pounding it into your skull like the blunt end of a rusty blade; discordant drones and abrasive feedback play well with Bullen’s vocal spew – lyrics synonymous with disgust and resignation to the nth degree align for some pretty blunt assertions – “…I hate your face” caps off a long list of hated things on album opener Ten Million Tons Of Shit. Bullen says the track isn’t about anyone in particular but you can’t help but think he’s lumped the entire modern world’s population into one cesspool as the reason for his negativity and the target for his (and the group’s) angst.

But the deeper twist to this story is the ‘disappointment’ that follows any grand let-down. Hatred, from the band’s perspective, is only the beginning; hatred without hope for recourse or recovery creates a kind of existential agony that’s uncomfortable for most people to deal with. The darkly humorous mid-tempo rocker Brain Sick and Year Zero, in its plodding psych jazz dissonance, talk of manipulation of the weak minded, snuffed childhood dreams and meaningless futures – Bullen’s viewpoint on life’s spoiled rewards was just a seed during his teenage years penning lyrics for Napalm Death’s Scum, and similar to the requisite oppositional defiance that forms the behavioural foundation for antisocial personality types, the unbridled, anarchical punk detonations from his earlier days were just a beacon of what was to come. Ironically, challenging the status quo suggests an ultimate desire for change – a hope for something better; Rainbow Grave adopts a more seasoned perspective, graduating to the next stage of grief – acceptance that our future is dead. 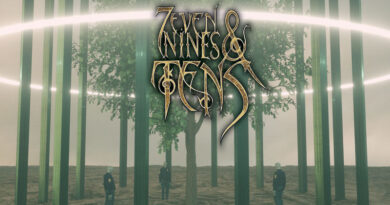 Review: Seven Nines And Tens ‘Over Opiated In A Forest Of Whispering Speakers’