I’m not sure if it’s because I hadn’t been paying attention, but Heavy Psych Sounds seems to have suddenly gotten very busy. The Rome-based label has been around for a few years, putting out records from Italian luminaries like Black Rainbows and Dr Cyclops, but now it’s pouring out releases (and re-releases) from newly-signed bands like Nebula, Brant Bjork, Gorilla, Alunah and others. Among them is Great Hallucinations, the eighth studio album by Greek veterans Nightstalker. According to the interweb, these guys have been playing together since 1989 which is a pretty impressive feat in itself.

Now, I’ll confess to approaching this one with a degree of trepidation. I have hazy memories of listening to one of Nightstalker’s previous releases on the Small Stone jukebox and finding the ropey, English-as-a-second language vocals off-putting enough to spoil my enjoyment of the music. Now, it might be that time has mellowed my eardrums or that the singer has improved considerably (or as I’m reviewing this, I was obliged to listen the whole way through, come what may), but this time around they’re not too distracting. There’s the odd moment where it sounds as though the singer has had dental surgery and the anaesthetic hasn’t completely worn off, but for the most part the vocals are fine. Not great, not good, but fine.

Despite the title, this doesn’t offer a cosmic smorgasbord of freaked-out psych, but 8 tracks of unpretentious heavy rock…

Quibbles about the singer aside, Great Hallucinations is actually a well-crafted album with enough good tunes to keep you listening to the end. Despite the title, this doesn’t offer a cosmic smorgasbord of freaked-out psych, but 8 tracks of unpretentious heavy rock. I liked the production on this one, modern but not too polite, and you can hear the bass guitar properly. Now, inaudible bass is one of my pet peeves (which, let’s be honest, is probably a matter of complete indifference to pretty much everyone), but in this case it makes a genuine difference as Andreas Lagios’s hectic playing really adds an extra dimension to several tracks.

While they’re hardly delving into the realms of prog, Nightstalker take enough twists and turns to keep your attention. The second track, Sweet Knife, is a good example. The main body of the song uses the trusty quiet-ballady-verse-followed-by-loud-heavy-chorus dynamic we all know and love, but it’s actually done very well. Before it gets stale, the song kicks into some up-tempo riffing and is all done in under five minutes. The following track, Sad Site Of The City, is even better. If I were being particularly critical, the middle third of the album meanders a bit. It’s not terrible, but it is rather forgettable. Fortunately, Nightstalker rally round to close with album highlight Hole In The Mirror and a cool, spacey bass outro on the title track.

A solid album of heavy rock probably isn’t the sexiest summary you’ll ever read, but Great Hallucinations is definitely worth a listen. 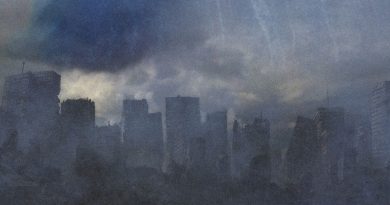