Not my first encounter on the Shaman with these Aussie bruisers by any means having reviewed the earlier Idiots album a number of years back but it’s been quite some time since I’d heard them. On Raving Drooling DEAD seem a bit like one of those an old college pals you’ve not seen in a long time and it takes you a second to recognise once you bump into them again. And what do you know, they’ve aged well.

Housed in a wonderfully colourful acid cartoon cover, the two J’s (Jace and Jem) are still ploughing a rumbling, tumbling drum and bass dynamo, though in 2020 the more chaotic and dirge-like elements that stood out to me before have, for the most part, been tidied up a little bit – Nunchukka Superfly being the major lapse into ruckus with its roared vocals and strangled solo from Harvey Milk‘s Creston Spiers. Perhaps it’s easier to say their fingernails are still a little over long and sharp, but there’s less dirt beneath them now.

Seven songs fly by pretty quickly in the company of the duo. They’ve honed both their groove, and their knack for assembling a song based around the kind of unison vocal line you can easily imagine yourself roaring along with after a few beers at a show. The first five songs all have a casual, natural ease to them that really gives them an air of feel good rock ‘n’ roll – albeit through a less traditional lens – that you could probably trace back through to their forefathers in The Saints or The Scientists if you wanted to.

But if we’re being honest, the reality of it is that you might also trace them back to the more overt influence of Big Business. It’s hard not to compare the two bands, not just because of their similar instrumentation, but because sonically, they’re a little too close in places. Not to a point where it’s detrimental to DEAD, I must add, but there are moments where the influence is a little too apparent. Grifted Apart is that moment. However it’s also a fantastic song. So really DEAD come across here as Big Business’ Australian counterpart rather than blatant, idea-free copyists.

They’ve honed both their groove, and their knack for assembling a song based around the kind of unison vocal line you can easily imagine yourself roaring along with after a few beers at a show…

The final two tracks certainly wipe out any suggestion the band are plagiarists however , drawing the album to a close on a more abstract note and bringing a more experimental aspect to the fore.

Firstly Repeating A Bad Decision introduces an unexpected industrial element – slowing into a steady, tense groove with reverberating echoes and swells coming and going through the background. Vocals turn from the drunken chorus of the rest of the album to alternate between hissing and a distant yell, before a calmer chorus of ‘you don’t mess around’ lulls us into the core of the song.

And thirteen minute closer Follow The Breathing keeps things on that more serene, yet slightly sinister, vibe stretching out to from a thunderous bass intro into Lynchian lurch and switching dynamics from calm, to menacing on a dime. The ghostly synths from Joe Preston towards the end of the track are fantastic, and rather than deliver a final death blow, the understated slow burn of this closing track is actually breath taking after all that’s come before. This shouldn’t surprise me (Murder Hollow on Idiots hinted at this sense of the macabre under the balls out rocking), but it does. The feeling you’re left with after these tracks is that perhaps this, the more lumbering and almost gothic side of DEAD is something they really need to dive into.

A game of two halves, but both halves are satisfactory in their own right for sure. Reservations about influences rubbing off aside, the only question left to answer is can these two very different sides of the band be married more fluidly. It’s hard to say, but with DEAD, it’s certainly the case that it’ll be worth waiting for that marriage to be consummated. 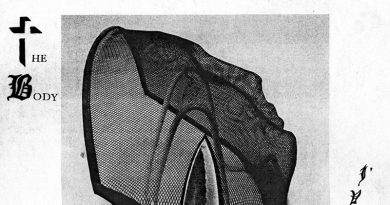 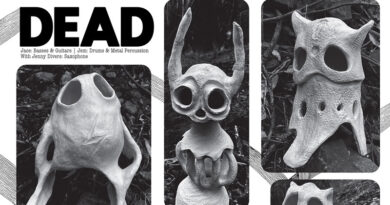