I picked this one to review largely on the basis that I thought the band name was cool. In fact, I think it’s hard to come up with a stoner rock band name involving the word ‘mammoth’ that doesn’t sound cool. There’s something about a huge, stomping, woolly creature from a previous epoch that’s very apt when it comes to naming a heavy rock band. However, given that the press blurb actually jokes about the stoner-rock-band-name-generator roots of Acid Mammoth, I suspect I might be a dwindling minority in thinking this.

In any event, Acid Mammoth hail from Greece and Under Acid Hoof is their second album, released on Italy’s excellent Heavy Psych Sounds. I misread the press release, which (if read hastily and without much care) gives the impression that the band are a father/son duo and was therefore a bit confused when a bass and second guitar turned up.  Acid Mammoth are in fact a four-piece and Chris Babalis Jr and Sr take up dual six-string duties. Not quite as cool as a duo, but still an excellent format for some quality family bonding, I would imagine.

Acid Mammoth are upfront about their influences, stating that they’re making music for ‘fan(s) of Electric Wizard, Monolord, Sleep.’ I’ve got no problem with that. I know we all like to think that our favourite records are in some way unique and follow their own path, but in reality most of them start from a fairly generic base, add some of the band’s own personality and, with a bit of luck, elevate the whole affair with some decent tunes. Sadly, if you take away the last two elements, the results are dull and, for me, that’s where Under Acid Hoof falls down.

The basic sound is fine – stoner-doom rock played competently with a thick, fuzzy production. For a specific point of reference, the whole album really reminded me of Witchcult Today era Electric Wizard. Acid Mammoth don’t have quite the same hokey retro horror film vibe that EW capture on that record and it doesn’t have quite the same all-analogue sound, but it’s definitely a good comparator. Again, I don’t have any particular issue with that, it’s just that without some inspired song-writing, it’s a recipe for dreary, uninteresting dirge.

Lots of people might listen to this and love it, but for me Under Acid Hoof just lacks that certain something to elevate it above the level of technically competent but forgettable…

Actually, once the comparison dawned on me, it inspired me to go back and listen to Witchcult Today for the first time in ages, which reminded me why I only ever listen to the opening three songs. Those first three tracks are awesome, but the rest of the album drags like a (thankfully imaginary) 24-hour marathon of the complete series of The Brittas Empire. I guess my point is that it’s difficult to make this stuff interesting and that many have tried and failed.

To return to Under Acid Hoof, the opening track, Them!, is promising. Although it doesn’t stick in the memory, it’s up-tempo and (given the genre) brief. It’s followed by Tree Of Woe, which almost works… It has a genuinely memorable chorus, but every time I’ve listened to it I’ve mentally tuned out for a few minutes and then been surprised that it was still playing when I started paying attention again. Jack The Riffer (and the earlier comments about the generic band name) show that Acid Mammoth clearly have a knowing sense of humour, so it’s a shame that it doesn’t come across in their music. That and the final two tracks don’t offer anything new – they’re well played and completely inoffensive, but have nothing that grabs you and demands your attention.

Clearly, this is all personal opinion. Lots of people might listen to this and love it, but for me Under Acid Hoof just lacks that certain something to elevate it above the level of technically competent but forgettable. 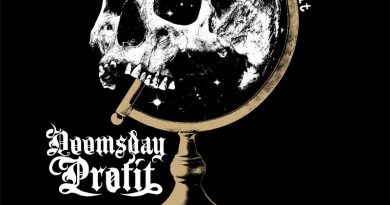